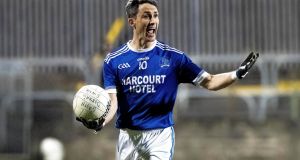 The Cavan champions looked dead and buried when trailing by 0-6 to 1-10 with 42 minutes on the clock but, instead, put in a storming finish which just fell short.

Both sides were profligate in the first half and spurned two gilt-edged goal chances apiece.

It was a case of third time lucky for the Glenties men in the 25th minute when Charlie McGuinness and Ciaran Thompson combined sweetly in a tight space for the latter to slide the ball under the advancing Leahy which saw Naomh Conaill lead by 0-5 to 1-5 at the interval.

The Donegal champions appeared to be cruising when sub Dermot Molloy made it 1-10 to 0-6 after 42 minutes, but their hosts came storming back to make a real fight of it.

Despite having sub Gavin Daly red carded (60 min), Castlerahan continued to reel in their opponents and a brace of points from Cormac Daly made it a two point game.

In a helter-skelter climax, the Naomh Conaill sealed a date with Clontibret in the semi-finals with a gem from county star Anthony Thompson.

1 David Humphreys: Georgia simply can't be dropped in at the deep end
2 Ireland’s clash against Georgia will be an important audition
3 Ireland’s work-ons: Four things Andy Farrell needs to address
4 Sordid murder of hurling brothers still resonates in south Galway
5 It’s good to have Richie Hogan back, he was missed
Real news has value SUBSCRIBE