Kilcoo show their experience to see off Magherafelt 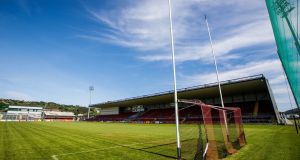 Experienced Kilcoo showed all their nous early in the second half to see off spirited Magherafelt in the Ulster quarter-finals in Pairc Esler.

Entering their eighth Ulster campaign in a decade, Mickey Moran’s Down side played the game on their terms throughout, controlling the tempo as they pleased, while dictating the lines of engagement.

The contrast in the Derry side’s naivety was apparent, and despite having numerous chances, they dropped balls short and expended valuable energy to stay in the game as Kilcoo got their noses 5-4 in front at half time.

Jerome Johnston singlehandedly increased the intensity when he struck the defining blow as early as the seventh minute in the second half, when the Magpies went on a 1-5 to 0-2 scoring run in the third quarter.

Kilcoo managed the game from that point onwards but did have to withstand a fightback in additional time with a disallowed goal from Simon McErlain and their goalkeeper Martin McCourt pulling off a fine stop from Derry star Emmet McGuckian.