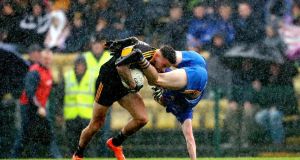 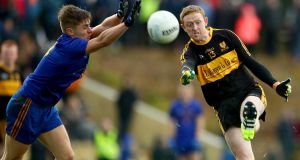 Dr Crokes defied treacherous conditions to put on a masterclass and qualify for another Munster club football final at their own ground in Killarney on Sunday. All of their fine scoring total of 5-20 came from play.

The Kerry champions fully justified their 1-6 odds with the bookies by dominating throughout, especially up front, where their lethal finishers David Shaw, Tony Brosnan and Brian Looney caused havoc.

And how their supporters in the attendance of 1,577 marvelled at their exploits with the promise of more to come at both provincial and national levels.

Crokes had their final place booked by the interval, when leading by 2-11 to 1-3.

A long ball from Denis O’Brien fell to Colm Keane, who offloaded to McGreevey, whose lobbed effort dropped into the net.

But, the ’Barrs hopes soon nosedived as Crokes hit back with a goal from Johnny Buckley, who beat John Kerins with a rasping left-footed drive from close range.

And it got worse in the first minute of injury-time with a brilliant second goal, courtesy of a super Kieran O’Leary pass into the path of Daithí Casey, who finished with a stunning drive.

The pattern continued on the resumption with Buckley pointing inside 20 seconds and any notion of Crokes easing up was quickly dismissed as the ’Barrs suffered a humbling defeat.

The introduction of Colm Cooper and Jordan Kiely added to the Cork side’s grief. When O’Leary pointed in the 40th minute, it meant all Crokes’ starting forwards scored.

Cooper and Kiely also got in on the act, the ‘Gooch’ claiming 0-3 and Kiely slamming in the fifth goal near the end following another flowing move.

Before that, Burns slotted in goal number four entering the closing quarter after Cooper teed him up. The final whistle couldn’t come quickly enough for the forlorn losers.