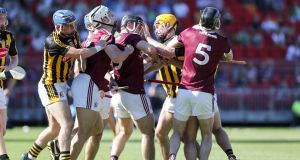 Galway claimed the inaugural Wild Geese Trophy after a dramatic comeback against Kilkenny in the Spotless Stadium, Sydney.

The Tribesmen looked down and out when they trailed by 14 points towards the end of the first half.

But they were a transformed team in the second, and a late, great goal from substitute Joe Mooney levelled a cracking match at the death which meant it had to be decided by a free-taking contest.

Galway converted four of their five attempts from the ‘65 yard line whereas Kilkenny could only manage three from four so they lost a match they had looked like winning for most of the contest.

The teams were level at three points apiece after a cagey enough opening ten minutes before Kilkenny took the initiative.

A tigerish defence where debutant Huw Lawlor impressed at full-back gave them a good platform to build on, and as the half progressed they began to dominate in the middle third.

James Maher and Liam Blanchfield were proving to be a dynamic midfield partnership, while Richie Hogan sparkled at centre-forward.

Two points each from Maher and Hogan had Kilkenny 0-7 to 0-5 ahead by the 15th minute.

Maher and Hogan hit another each in quick succession to move Kilkenny six points clear within another five minutes, and then they landed the heaviest blow of the match yet when Ger Aylward hit his and Kilkenny’s first goal.

Galway goalkeeper Fearghal Flannery got his hurl to the sliotar, but couldn’t stop it squirming into the bottom corner of the net.

John Donnelly did well to catch a high ball and then even better to pop a perfect hand-pass into the path of Martin Keoghan who picked out Aylward.

Aylward finished coolly to the far corner from a tight angle.

Richie Hogan followed up quickly after that with a free, and Kilkenny were leading by 2-14 to 0-6 and in complete control.

Galway manager Micheál Donoghue responded by bringing on Brian Concannon and Davy Glennon for Conor Whelan and Joseph Cooney, and both men would go on to have a big impact on the game.

Before they did though, it was Cathal Mannion and Niall Burke who inspired a Galway revival in the final few minutes of the first half.

Mannion struck two classy points and Burke bagged a goal that meant Galway’s deficit was a more manageable eight points at the break, with Kilkenny leading by 2-15 to 1-10.

The tide turned against the Cats in a ten-minute spell between the 40th and 50th minute when Galway outscored them by 1-5 to 0-1 to reduce the gap to just three.

The goal was scored by the Tribesmen’s best player on the day, Cathal Mannion, after he was put through by Johnny Coen, and came after lively sub Concannon had hit a quick-fire brace of points.

It looked like Galway’s comeback might be derailed when Joe Canning was red-carded for a high tackle on Enda Morrissey on 54 minutes, but instead his departure seemed to fire up his team-mates.

Davy Glennon scored their third goal of the match to leave just a point between the teams, but Kilkenny looked to have survived that wobble when they went straight down the field and scored one of their own through the excellent Walter Walsh.

Galway just refused to die, though, and were driven forward time and again by the inspirational duo Padraic Mannion and Aidan Harte.

The Tribesmen traded point for point with Kilkenny down the home straight and were rewarded for their perseverance when Mooney smashed a brilliant equalising goal to the roof of the net.

And so, to the free-taking contest. Kilkenny started flawlessly by converting their first three from three whereas Jason Flynn missed for the Tribesmen.