Banner heading for Boston along with Limerick, Cork and Wexford 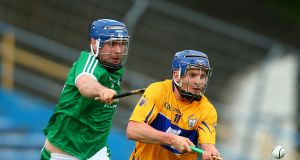 Hurling goes global over the next couple of weeks with Galway and Kilkenny meeting for the Wild Geese trophy in Sydney this weekend.

The other four of this year’s top six counties, All-Ireland champions Limerick, Clare, Cork and Wexford are all in Boston next week for the Fenway Classic, 11-a-side tournament.

Among those crossing the Atlantic is Clare’s Podge Collins, who together with his county had their best summer since 2013 and the unforgettable All-Ireland replay win against Cork.

A combination of injury and the decision to play football – his father Colm manages Clare – reduced his visibility in the small-ball game in the years that followed.

Reflecting on his bad luck with injury – highlighted in Marie Crowe’s 2016 documentary on his return from a torn cruciate – he said that it was only this year that he felt fully injury-free.

“I’d say last year [2017]the league went relatively well for me and then I started breaking down for the championship. I tore the quad – broke my foot against Limerick but you can’t really control that – the left quad went and then the right quad.

“This year was definitely the first year where I felt fully right and it was probably a case of easing myself back into it as the year went on.”

He suspects that the cruciate injury had had a knock-on effect.

“I don’t really know. I was chatting to [Mayo footballer] Andy Moran last year and he said it took him three years to be back fully to his best so it does take time.

“The cruciate is such an important ligament and that snapping does take time. You can be back on the field in six or seven months no problem, I’ve seen lads doing it: Aron Shanagher did it this year with Clare and he was perfect, but just to get up to the level of consistency that’s required, it does take a few years.”

This year saw Collins and Clare finally back in the big times after four years of disappointments.

In the new round-robin provincial format, Clare thrived – becoming the only team this season to defeat All-Ireland champions Limerick – and if a second successive Munster final defeat was a low point, beating Wexford in the All-Ireland quarter-finals meant t the county returned to Croke Park for the first time since 2013.

The draw and replay against then champions Galway were tightly contested before Clare lost narrowly. He spelled out the difference a good season makes for a team.

“I suppose when you’re getting knocked out of the championship early the morale around the panel and the county is very low and you’re listening to a lot of it and it is very draining.

“Then, when you have a good year and things start going well there is a buzz there and the buzz starts filtering through and the morale comes back and the crack starts happening a lot easier. That is just the nature of it – any success is happening or you’re winning games and that was nice this year definitely.”

He hasn’t spent the years since 2013 fretting over the most pervasive judgement: that Clare should have won more, having been so young five years ago.

“From a young age I was always told ‘this could be your last one’ – whether it was club or schools. I never really thought after 2013 ‘this is going to happen for years to come’. I take every year on its merits and give it as best a go as I can and see how it goes.”

Allianz have been announced as sponsors of the Wild Geese trophy event in Sydney where Galway face Kilkenny on Sunday.

Gordon D’Arcy: Ireland don’t need to do a Finn Russell on it 06:00
Beibhinn Parsons ready to move on the next level 06:00
CJ Stander ready for Italy after lockdown sheep battles 06:00
Aki, Ringrose and Henshaw: Brian O’Driscoll has his say on Ireland’s midfield riddle 06:00
O’Neill steps into the unknown as Galway eye silverware 05:00
Crossword Get access to over 6,000 interactive crosswords