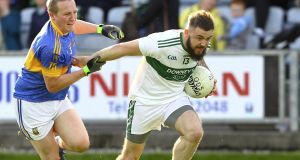 Portlaoise have an experienced side and the late-blooming Ricky Maher fired in a couple of goals in the county final against O’Dempsey’s to underline his threat. Photograph: Ken Sutton/Inpho

This meeting of the past two AHL winners is part of an Irish cultural weekend in Sydney with the Wild Geese trophy at stake. The counties also played three times in this summer’s championship with Galway winning two and one drawn clash.

“Yeah, there’s always that bit of bite there,” says experienced Kilkenny player Conor Fogarty, “and rightly so. We’re after travelling across the world to play this match and you’re not going to take it too lightheartedly.

“I’m really looking forward to it, just a chance to play a match in a different country. Even tomorrow to go out and train and get back with the lads, I’m looking forward to that too. Once you’re beaten and knocked out of the championship you miss the whole scene. You miss going in training, you miss playing matches.”

Weather may have played a role but Ballintubber’s 0-6 to 0-5 win over Tourlestrane appears to have been every bit as grim as it sounds. Just one point from play but job done, as the Mayo champions have succeeded in achieving during recent weeks in tight contests in the county as well as the province.

The O’Connor brothers have been prominent and they travel to Carrick-on-Shannon as hot favourites. But Aughawillan are more experienced at this stage and have Gary Plunkett in fine form. Saying the Leitrim side will put it up to Ballintubber sounds patronising but it might also be true.
Verdict: Ballintubber

The clubs lead the provincial roll of honour with All-Ireland champions Corofin on eight and Clann on seven. There are however clear disparities behind the headline figures.

The Roscommon club won all their titles during a glorious decade culminating in 1989 and their opponents didn’t win a first until two years later. Another more biting difference for Clann is that Corofin have turned their eight provincial wins into three All-Irelands whereas the Roscommon club are famously waiting for their first, having lost four finals in successive years in the late 1980s.

There were signs in the Galway final that Corofin may be feeling the mileage with three of the last four provincial titles but Clann followed up a powerful county final win over Brigid’s with a more fallible outing against London champions Tír Chonaill Gaels. Fergal Lennon misses out with a recurrent back injury but The Roscommon side are in good fettle.

The champions may just have too much for them, though.
Verdict: Corofin

A quirk of fate has seen Dunboyne run into Crokes on both of their previous Leinster campaigns with the Dubliners winning both. A very assured county final win against a resilient St Jude’s has given the Stillorgan club another provincial run on the 10th anniversary of their last All-Ireland success.

They look too strong overall from Cian O’Sullivan at the back to Paul Mannion up front despite the impressive county final display by Dunboyne and their effortless swatting of Shelamaliers, an impression strengthened by the reported departure for a year’s break of county forward Donal Lenihan.
Verdict: Kilmacud

Two strong presences in the province whose tight contest a year ago set Moorefield on the path to the Leinster title. This promises more of the same with both sides coming off comfortable wins in the Leinster first round and Laois final, respectively. Moorefield have the confidence of champions but Portlaoise have an experienced side and late-blooming Ricky Maher fired in a couple of goals to underline his threat. Narrow margins and maybe home advantage to decide it.
Verdict: Moorefield

Rhode weren’t exactly tested by St Patrick’s in match that would have been as appropriately played in Le Mans as Aughrim a day after the Wicklow final. The Offaly club’s guile and productive attack make them more likely winners against the serial Longford champions, whose own scoring credentials were seen to better effect in the county final replay than the wind-whipped draw.
Verdict: Rhode

Newtown showed the killer instinct in the Louth final, getting back into contention with a fortuitous goal and then overwhelming Naomh Mairtín in the closing stages to retain the title. Éire Óg’s calculated style will make this tricky for the home side – maybe too tricky.
Verdict: Éire Óg

An interesting semi-final between the Clare kingpins and Waterford champions, who have given an excellent account of themselves in recent seasons. Home advantage in Dungarvan allied to the form of county hurlers Conor Gleeson – an outstanding footballer – and Jamie Barron as well as Shane Walsh and big-ball stalwart Thomas O’Gorman would appear to give an advantage to The Nire but Miltown have been impressive so far with a no-fuss win in the Clare final.
Verdict: The Nire

Dr Crokes (Kerry) v St Finbarr’s (Cork), Dr Crokes GAA [Live, TG4]- A great celebration for Finbarr’s after a first county title in over 30 years gets them back into provincial contention – they’ve been here slightly more recently when filling in for divisional winners in 1991 – with the encouragement of their predecessors Nemo’s win against Crokes last year.

There have been signs though that the Kerry champions – who racked up a record 13th title last month–- have regrouped for another crack at the All-Ireland won two seasons ago.

Colm Cooper has settled into the bench role of eminence grise but the new generation showed well in the more comprehensive than expected win over Dingle. Pat O’Shea’s team haven’t lost a home fixture across the road from Fitzgerald Stadium and their first All-Ireland when O’Shea was a player incorporated a win here against the Barrs.
Verdict: Dr Crokes

Ballycran (Down) v Cushendall (Antrim), Athletic Grounds, NB 3.0 - Both teams upset the odds along the way - Ballycran especially in terminating the great run of Slaughtneil, who showed signs of all their efforts on two fronts in recent years. Cushendall played well to see off Loughgiel in the Antrim final and have the experience to reclaim the title last won three years ago.
Verdict: Cushendall