DRA spells out need for 'intent' in Cathal Dunbar suspension 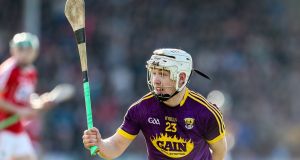 It slipped by without much comment but Wexford hurler Cathal Dunbar’s absence because of suspension from Naomh Éanna’s win over Camross in the club’s inaugural Leinster championship match arose because of an unusual case before the Disputes Resolution Authority (DRA), Croke Park’s independent arbitration service.

It ended up as a caution to referees to be specific when it comes to the infraction of “deliberately pulling on or taking hold of a faceguard or any part of an opponent’s helmet” and a warning to county committees to seek clarification if the referee’s report doesn’t specify the necessary intention.

Dunbar was shown a red card in the Wexford hurling semi-final against Oylegate-Glenbrien and suspended for one match – the county final. He challenged the decision at Leinster Council but it was upheld and he then took his case to the DRA.

The player’s argument was essentially that the referee hadn’t specified that the action was deliberate – despite it not being a red card infraction otherwise.

It was held by the tribunal however that deliberate is specifically mentioned in the rules and furthermore, a previous DRA decision in the case of Waterford’s Tadhg de Búrca – who missed his county’s All-Ireland semi-final defeat of Cork last year because of the same foul, coincidentally deemed to have been committed against Wexford – had stated: “There is no doubt that ‘intention’ is a necessary element of the offence.”

The Wexford County Board hadn’t clarified with the match referee that his decision had been based on an intentional action.

With the DRA meeting running late there was no time to seek that clarification on what was the night before the Wexford final and so Dunbar would not stand suspended for the match but pending contact with the referee, the matter would be reheard.

When the clarification was obtained it unsurprisingly confirmed the intent and the appropriate suspension was imposed.

For some reason, word went out that the player wouldn’t have to serve the ban until next year’s Wexford county championship – despite the DRA decision stating clearly the relevant rule:

“As per Rule 6.25(a) “The county, provincial and All-Ireland stages of the respective club senior, intermediate and junior football and hurling championship constitute the one competition”.

Given the ultimate determination by the DRA that the suspension was warranted, outgoing champions St Martin’s may feel aggrieved that a player whose four-point tally constituted the difference between the sides in the county final got to play despite the outcome of the case.

In the event he missed Sunday’s Leinster club match against Camross, which the Gorey club won by five points and will now face Henry Shefflin’s Ballyhale in the provincial semi-final.

Sunday’s Munster semi-final between Waterford’s Ballygunner and Ballyea from Clare set a new standard for epic by running into two periods of extra time before Ballygunner came out on top by three points.

Waterford county star Pauric Mahony was the chief engineer, firing over 0-14, including six from play. He compared the extended contest with last year’s quarter-final against Thurles, which also went to extra time and in which he managed a similar 1-10, five points from play.

“Huge credit must go to our physical trainer, Shay Fitzpatrick for the work he’s done with this team. From when we went back training in February or March we said that we need to get to a separate gear in terms of our fitness levels,” said Mahoney.

“At full-time against Thurles Sarsfields last year we were out on our feet but today at the end of normal time we had loads more energy in the tank.”

Ballygunner just about caught Ballyea on Sunday, requiring a goal in the dying seconds of ordinary time from Mahony’s brother Philip, who no-one could remember raising a green flag previously.

“I don’t know what happened there!” deadpanned his brother.

Another provincial hurling match takes place on Tuesday evening in Parnell Park with the postponed fixture between Dublin champions Ballyboden and their Westmeath counterparts Clonkill.

Originally fixed for Sunday afternoon, the match was postponed because of a bereavement in the Clonkill club – the death after an accident of three-year-old Annabel Loughlin, daughter of former Westmeath hurler, Enda.

After criticism on social media of the Leinster Council’s decision on the refixture, the club released a statement supporting the provincial council.

“Clonkill Hurling Club were consulted by the Leinster Council last Friday, November 2 and we agreed to play the match this Tuesday, November 6.

“Most importantly, we think of the Loughlin family at this difficult time and the loss their little princess Annabel RIP.”