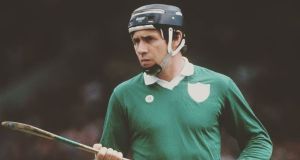 Leonard Enright dominated the number three jersey on the All Stars in the early 1980s.

There was no mistaking the elegiac tones in which various distinguished Patrickswell hurlers paid tribute to Leonard Enright on the RTE coverage of Friday night’s All Stars ceremonies but it was still a shock to hear that he had passed away at the age of 65 after a long illness, within hours of the broadcast.

The item on the programme was to memorialise the club in a superb year, which had seen the Liam MacCarthy return to Limerick for the first time in 45 years with three Patrickswell men on board – Cian Lynch, Diarmuid Byrnes and Aaron Gillane – and Lynch scooping the Hurler of the Year award.

Lynch’s uncle Ciarán Carey spoke and was like Leonard Enright for most of his career one of the in-between generations, who came close to bridging the gap back to 1973 without ever getting there.

Richie Bennis of the 1973 team and a former Limerick manager, who led the county to the 2007 All-Ireland final, also spoke about his old club-mate.

The item focused on Enright – inducted into the GAA Hall of Fame in August - who actually had a medal from ‘73 as member of the panel but by the time he became a fixture on the team the county would have only one All-Ireland final appearance to its name, in 1980.

In a further coincidence he had been included in a 2013 selection of the best players in the 1980s not to have won an All-Ireland medal – just as his club men Carey and Gary Kirby were honoured in September on a team of the 1990s selected from all counties.

Leonard Enright came into the Limerick team at full back just after Pat Hartigan, who had won five successive All Stars in the 1970s.

Enright did so well that he in turn dominated the number three jersey on the All Stars in the early 1980s, winning the award in 1980, ‘81 and ‘83. In Brendan Fullam’s book Hurling Giants, Leonard Enright recalled the 1980s Munster final as a career highlight.

Limerick won the title and in doing so, prevented Cork from doing a provincial six-in-a-row. Enright was a traditional full back, strong and direct but also a fine hurler. As recalled on television on Friday, he hurled with Patrickswell up until his 40s.

In later life he was involved in the development of hurling in Mary Immaculate College of Education, now one of the game’s third-level strongholds. He became a county councillor for Fianna Fáil between 1999 and 2009.

Limerick GAA paid tribute: “All involved with Limerick GAA are saddened to hear of the passing of the legendary Leonard Enright.

“One of the finest full backs to grace the Limerick jersey. Our thoughts and prayers are with the Enright Family at this sad time.”

He attended his induction into the Hall of Fame in August and it was fitting that he was able to enjoy the recognition of a great career before the sadly premature passing of his life.