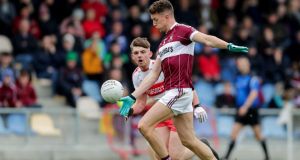 It may not have been pretty but the manner of victory won’t worry St Columba’s of Mullinalaghta one iota after they recorded a nerve-tingling win over Rhode at O’Connor Park in Tullamore on Sunday.

In a real dogfight of a game, the Longford champions were marginally the better team on the day and deserved to advance to the Leinster semi-final.

They had to show real character but with midfielder John Keegan having a super game, they dug out the result.

A pivotal moment in the game was a 17th-minute red card for influential Rhode defender Brian Darby and the extra man was crucial on an energy sapping pitch. At that stage, the visitors were leading by 0-2 to no score but, ironically, Rhode played their best football after this. They got the next three points to lead before Rian Brady made it all square at half-time, 0-3 each.

The game was won and lost in the 35th minute as Rhode had an Anton Sullivan goal disallowed for a square ball and Mullinalaghta went straight down the pitch where Rian Brady got a scrambled goal. That put the winners 1-3 to 0-4 ahead and the Offaly champions were crying out for inspiration that didn’t surface.

Twice more they had the gap back to a point but they couldn’t equalise and points from Keegan and Donal McElligott pushed Mullinalaghta three clear with normal time up. Seven minutes of injury time were played but Rhode could only manage a Ruari McNamee free as Mullinalaghta held on.