Kevin McStay: No hiding Mayo’s many mistakes against Dublin

Mayo went into the first half with all guns blazing, but failed to exploit their advantage 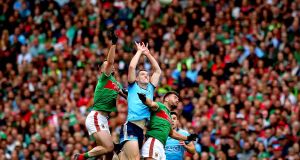 I found myself in Dublin early on Saturday morning. It was a hectic week for Mayo supporters. The Super 8s did their job in the sense that the four best teams on the island progressed to the All-Ireland semi-finals. Furthermore, the only unbeaten teams have gone on to the final. But among the Mayo supporters, there was considerable disquiet at the fact that their team was playing its seventh game in eight weeks.

Obviously, Dublin also played last week but had the luxury of resting a host of starting players for what was a glorified challenge game against Tyrone. It’s true that Mayo’s path has been extremely tough. But you make your own bed, to some extent. If you lose your championship opener to Roscommon and also a match in Killarney, then that it is your issue.

11 Nanny state? After the mess here in Texas, I’d give my right arm to live in one

15 Covid-19 vaccines: What’s going on and why are targets being missed?

16 Loyalists and the Irish Sea border: ‘From what I’ve seen it’s all hyped up’

17 Moses Farrow: ‘I felt inherently like I was a bad kid. The abuse at home reinforced that’

21 Barry Gibb: ‘My brothers had to deal with their demons, but my wife wasn’t going to have it’

22 If people feel suicidal, fight their toxic belief that the world would be better without them

23 Clench your glutes, pick up marbles with your toes and six other easy ways to keep fit

28 Covid-19 Vaccine Tracker: What's available in the Republic of Ireland and what else is coming?

29 How Enter The Dragon became a martial arts phenomenon

30 What a work-from-home space should cost: Converted attic, garden office or spare room

33 Will the new first-time buyer plan push up house prices?

35 Irish Times view on the restless state of unionism

36 Gabriel Byrne on Weinstein: ‘He was a violent bully. He had such power’