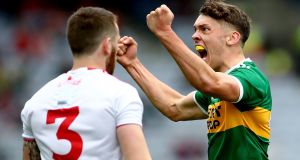 Let the yerrathon begin. Much like Jim Gavin the previous week when asked about Mayo’s win over Donegal, Peter Keane used his post-match press duties at Croke Park to affect a general sense of ignorance about how the first semi-final had gone. At some stage in the coming days – maybe even in your Monday Irish Times (morning, Peter) – he will become informed of the particulars of the All-Ireland final that awaits in three weeks. We tried to tell him here, but he was in no mad hurry to find out.

“Sure look,” said the Kerry manager after his team’s 1-18 to 0-18 win over Tyrone, “we came here today, the plan was to try to win the game and we’ll worry about the final tomorrow. There’s not much point getting hung up on that, or getting hung up on the Dubs last night. We’ll take it one game at a time, I’ve been saying that all year, I’m beginning to bore myself hearing it, but that is the reality.

“But I hear they put up a big score in the second half against Mayo, did they? Sure you’re dealing with potentially the greatest team that has ever played. How does it feel? Sure we’ll find that out over the next few weeks.

Well indeed. For his young Kerry side, a final appearance marks 2019 down as a good year, whatever happens. For 10 of the 21 players Keane used in the game, this was their first win in Croke Park as senior footballers. They overcome a callow first-half display to outscore Tyrone by 1-13 to 0-9 in the second half, with David Clifford, Stephen O’Brien and Paul Geaney all showing huge leadership. Tommy Walsh blasted from the past too for a useful 20 minutes to see them across the line.

They will go into the final as massive outsiders, of course, the first Kerry side in generations to go to a decider with fingers crossed and little enough pressure. Everyone expects Dublin to complete the five-in-a-row and only we slaves to a good story will spend the next few weeks talking ourselves into it being a game. Mayo found out on Saturday night the extent of the Dubs’ disregard for an interesting narrative.

This was a curious enough game, all the same. Played out to a desperately small crowd of 33,848, it looked to be going Tyrone’s way for long periods. Cathal McShane, their marine corps full-forward, had the run of the place in the first half, scoring three points from play and setting up a couple more for Mattie Donnelly and Niall Sludden. Kerry’s full-back line was left cruelly exposed and the 0-9 to 0-5 half-time lead was perfectly apt for the sort of game it had been.

Tyrone will be sick to have thrown it away from such a position of strength. That said, Keane’s changes did make a fair amount of difference as the game wore on. Jack Sherwood brought a level of thrust to the Kerry midfield that had been absent. Gavin White and Walsh both came on in the forwards but were ultimately of greater use further back the field, where they made goalkeeper Shane Ryan’s life a lot easier at kick-out time as the game wound down.

But ultimately, it was Kerry’s rat-a-tat scoring power that pushed them clear. McShane had been peerless in the first half for Tyrone but had two bad misses in the third quarter and suddenly Tyrone were blinking. Clifford eased into action, swinging over a couple of picture-book scores from wide angles before O’Brien was put away by a Geaney pass on 56 minutes and he promptly bust the game open with a goal.

For Tyrone, it means they go another year without a championship victory against either Kerry, Dublin or Mayo. That’s 11 seasons, 11 games, 11 defeats. Mickey Harte said afterwards that he was fully ready to keep the job and go again next year but this is their fourth All-Ireland semi-final defeat in their last five appearances at this stage. Who knows what the winter has in store?

“People talk about that you don’t always get what you deserve in life,” Harte philosophised afterwards. “And perhaps the outcome and result today isn’t what a lot of our players deserve, if you want to put that word in its finer context.

“But that’s life, life’s a journey and sometimes things go very well for you and sometimes they don’t. And perhaps when it doesn’t go well is the days when you learn more about yourself as a person, never mind as a sports person.

“So we’ve been on many rough roads in the past and I’m sure there will be some more bumps in the future. But we have to be resilient and deal with those bumps and get back and look to do more.”

1 Tipping Point: DeChambeau’s transformation raises questions, but who will ask them?
2 Monica Seles: The warrior queen who could have been the best ever
3 Ken Early: Resurgent United can be the top team – in Manchester
4 All in the Game: Dugarry apologises to Messi for ‘half autistic’ jibe
5 Clock ticking for Jorginho to force his way back into Lampard’s plans
Real news has value SUBSCRIBE