Kerry earn the right to fight Dublin on the final frontier 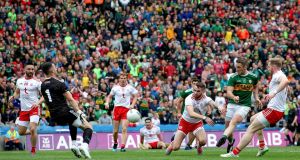 The last two contenders for Dublin’s title jousted at Croke Park on Sunday to see which of them would challenge the champions in three weeks. It was like the first All-Ireland semi-final – a contest of two contrasting halves and by the end, it was clear that whatever their ultimate prospects, Kerry’s credentials were significantly more impressive.

Yet in the first half, this was far from obvious, as Tyrone did what they do and encountered minimal resistance from Kerry.

Essentially outlined, this was a face-off between an immensely promising team of rising talents and a practised collective with an All-Ireland final and two semi-finals behind them. It looked for 35 minutes as if experience and a more clinical grasp of what was needed were going to propel Tyrone to a comfortable victory.

It was therefore much to Kerry’s credit that, trailing by five points to a defensively oriented team, they diagnosed the ailments and prescribed the cure at half-time.

When the necessary dose was administered, Mickey Harte’s team had no effective answer. A 10-minute barrage of 1-5 in the middle of the second half was answered by a single point and that seven-point turnaround changed the match from a comfortable Tyrone lead to a four-point advantage for the Munster champions.

It was a strange and almost uneasy occasion, as if Dublin’s thunderclap performance the previous evening had created so much anxiety amongst likely opponents that the second semi-final’s relevance had been undermined.

The poorest semi-final attendance of the modern, 19-year qualifier era was nearly 20,000 down on the crowd that came to the previous meeting at this level between the counties four years ago.

The view that Kerry’s greater finesse in attack might turn the key proved accurate and the marksmanship of David Clifford, Paul Geaney and Stephen O’Brien proved the difference compared to Tyrone’s less abundant resources although Cathal McShane continued the electric form that sees him virtually certain to end the summer as the top scorer in the championship.

For much of the match, especially early on, Jason Foley made a decent fist of frustrating McShane but given Kerry’s odd set-up – Paul Murphy and Gavin Crowley standing sentry beyond the 45-metre line, a bit like having bodyguards stationed in the next parish – Foley and the team were exposed in too much space so that even knocked down ball had to be won a second time.

In the first half Tyrone were sharp and accurate. McShane had three points in the opening 24 minutes and, conservatively, a hand in three others as both Niall Sludden and Matthew Donnelly broke through for a couple of points each. By half-time they had kicked only two wides.

At the other end they had the familiar look, shifting en masse to clog up the paths to their own goal. Mickey Harte’s match-ups were functioning quite well: Pádraig Hampsey on Paul Geaney, Ronan McNamee on Clifford and Conor Meyler on Seán O’Shea. None scored more than once from play before half-time.

Their hard collective work smothered Kerry’s labouring attacks. Too often they embarked on improbable solo runs, carried the ball into tackles where they were inevitably turned over in possession.

Peter Keane’s team looked simply out of ideas and relied on O’Shea’s place kicking – even one of those shots went wide – and Clifford’s inspiration, but even that malfunctioned along the way, as he took a quick free in the 17th minute to squander the possession.

Kerry had their own successes in the match-ups and Tom O’Sullivan did a really effective job on keeping Peter Harte far quieter than Tyrone would have hoped.

Half-time maybe came at an opportune time for the Munster champions, as they needed to strategise some way of exerting pressure at the other end.

Normally, trailing by four against a team as security conscious as Tyrone would spell a nearly impossible task but Kerry made the changes and raised the tempo and, even if took a while to erode the deficit, they re-started in far more promising form.

Dropped captain Gavin White emerged for the second half in place of Shane Enright and so did Jack Sherwood for Adrian Spillane. Sherwood, who also got a point, added energy and direct – and more importantly, constructive – running to the repertoire. This brought Geaney into the match and got the scoreboard moving for Kerry – a free for fouling the corner forward and then a score for him.

The problem was that the scoreboard continued to move against them as well. Referee Maurice Deegan was eagle-eyed in his pursuit of off-the-ball fouls. McShane continued to torment the Kerry full-back line as well as kick frees.

The tide was turning, though. David Moran, who made a major contribution both at centrefield as well as in his tireless movement up and down the field, cut the margin to one – 0-11 to 0-12 as the final quarter opened.

The assist came from replacement Tommy Walsh, who also made a big impact, providing a physical target option and setting up scores within minutes of coming on – including the equaliser, kicked with devastating aplomb by Clifford, whose ability to find shots in tight spaces was a feature of the second half.

Within a minute, Geaney had picked out O’Brien in space for a clean finish, followed by a point by the same player and suddenly there was a gap of four points, 1-13 to 0-12.

O’Brien, perhaps Kerry’s most credible Footballer of the Year candidate, capped another good display with the anxiety of a black card in injury-time, which promises some anxious visits to committee rooms to try to challenge a cumulative suspension for three such sanctions in the past year.

Tyrone’s one chance to pull the match out of the fire came to nothing when McShane’s good run along the end-line culminated in a hand-pass across to Harte who couldn’t get enough of a contact on the ball and Shane Ryan saved.

There was some alarm for Kerry when Tyrone mounted a late press on the Kerry kick-outs, forcing Ryan to prevaricate but he made his re-starts, on one occasion with the help of Walsh thundering back into his own half to provide an outlet for his beleaguered goalkeeper.

Talk of athletes getting Covid-19 vaccines early is growing louder 14:02
Sam Underhill out of England squad in latest blow ahead of Six Nations 14:34
Mo Farah says athletes told they will receive vaccines before Olympics 12:33
Six Nations 2021: Could Finn Russell inspire a Scottish challenge? 11:00
Struggling Liverpool have lost their fun-loving flair 10:27
Crossword Get access to over 6,000 interactive crosswords