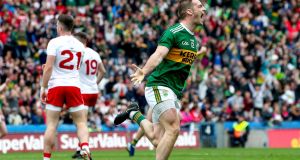 Trying to halt Dublin’s quest for a record fifth successive All-Ireland is one thing; trying to do it without one of your best forwards is another.

No wonder this was one of the first questions for Kerry manager Peter Keane after his team had successfully negotiated their way into the September 1st showdown at Croke Park, coming from behind at half-time to hit Tyrone with 1-1 without reply in the 55th, the goal and the point both coming from the boot of Stephen O’Brien. He finished with 1-2 and was awarded the man-of-the-match.

Only with the game already won, O’Brien was black carded in the 76th minute – the last minute of injury time – for a clear pull down on Connor McAliskey. It was also his third black card in total, which results in a one-match suspension. As of now it means O’Brien will miss that final showdown with Dublin on September 1st.

O’Brien’s first black card was against Galway back in the league, his second coming last Saturday in the last Super 8s game against Meath in Navan. Keane wasn’t yet willing to go into the likely nature of a Kerry appeal, but it appears inevitable given the clear and present danger of being without one of their best forwards.

“Yerrah, there were fellas talking about that outside there all right, when I was coming in,” said Keane in the Croke Park media room shortly after the game ended. “But we’ll look at that tonight when we go home, or in the morning, and we’ll see what happens from there.”

O’Brien himself was asked about the prospect of missing the Dublin game, when accepting the man-of-the-match award, the Kenmare forward giving a clearer intention of an appeal: “Yeah, I was aware of that going in, and I think the black card in the Meath game was very harsh, I was running off the ball, it was an accidental head clash, and I’ll certainly be appealing that one.”

“We came out a different team, and that’s the way we want to play, going forward. Everyone knows the substitutions bench has a huge role to play as well, and there’s loads of lads there pushing to make the starting team, pushing to make the 26, and that’s the strength of our panel. A huge challenge in the final now, against Dublin, and it should be a great occasion.”

Keane also pointed to that considerable improvement in the second half.

“ Well the first half was very tactical, and we hit a lot of wides, which didn’t help our situation, but the second half was much better.

“That’s what we did expect, that it would be tactical, and thankfully it opened more in the second half, and we got out on the right side. I think our movement was much, much better, and I think we squeezed them a small little bit more further up the field as well. And I think we were prepared to take them on, which we weren’t doing in the first half. And again the accuracy was better.

Still Kerry won’t want to be looking for a replacement for O’Brien in advance of the final. Tyrone’s Peter Harte, who was also carrying three black cards last month, had his black card against Longford wiped on appeal.