The Backdoor: David Clifford is a frightening prospect 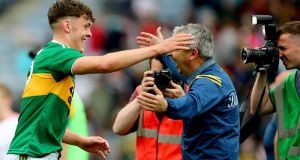 For less than 24 hours on Saturday evening, David Clifford lost the crown he had held since his senior career debut – no longer was he the incumbent player of his generation. That pendulum had swung back in Con O’Callaghan’s favour, his man-of-the-match performance pushing the final dagger into Mayo’s ageing heart.

Yesterday afternoon arrived and the Fossa man reminded us all of why he deserves to be garlanded with such a title. It’s not just his physicality and scoring prowess, it’s his intelligence and instinct, and the fact that he still has a few years in hand on his Dublin counterpart, that sets him apart.

It’s worth remembering that when the Cuala man scampered through Mayo’s defence in the 2017 All-Ireland final to truly mark his arrival on the biggest stage with a goal, Clifford was in under the Cusack Stand, perhaps already sipping on a celebratory Cidona, having produced one of the finest minor All-Ireland-winning performances in living memory. 4-4 was his final tally as Kerry won their fourth successive All-Ireland at the grade.

That he scored five points yesterday, while seeming anonymous for large periods, was significant. In the long line of attributes he boasts his timing is as fundamental to his game as any.

It was the 20-year-old who swung over the levelling score just before Stephen O’Brien’s game-defining goal and it was the precocious forward’s point who stretched Kerry’s lead to five down the final stretch, ultimately putting the game beyond Tyrone’s reach.

This was supposed to be a learning period for Clifford, ahead of making the team his own as he entered his mid-20s, as is currently the case with O’Callaghan.

The Kerryman is so far ahead of the development we expected of him, he’s become an utterly frightening prospect, and so the pendulum swings back again.

We’ve all seen the footage: Liam Sheedy reacting to the final whistle in Tipperary’s semi-final win, that feral look in his eyes as he turned to the Hogan Stand, his reaction falling somewhere between some ancient Maori ritual and a Ric Flair tribute. Woooo!

Reaching another final brought about – what seemed like – a mixture of relief and adrenaline, all wrapped up in the healthy sort of sporting masculinity. But the comedown followed and that surely involved an uneasy sense of pressure.

Brian Cody is aiming to secure his 12th All-Ireland title as manager and, although much is expected of him, this Kilkenny side is largely a project one – albeit intertwined with names like Reid and Hogan and Fennelly.

For Tipperary, a return of two All-Ireland wins over the last decade is a fairly meagre return for a side boasting McGraths and Mahers, not to mention the peerlessly potent Callanan.

They’re not getting any younger. And for a side that have rarely been a puck of the ball away from their neighbours they need another collection of Celtic Crosses to have that legendary status bestowed upon them.

As of now, they’re just great – a fair achievement in itself but Sheedy will want more.

“I watched the Leinster final, the 1996 Leinster final, on telly last week, and they’re gammy! So there’s none of them fellas going to talk about us.” – Cork hurler Patrick Horgan revealed that the level of analysis by hurling pundits was a bugbear of his when accepting the PwC GAA/GPA Hurler of the Month award for July last week.

Dublin are phenomenal and they deserve whatever plaudits come their way. With that necessary prelude out of the way, the question must be asked: How long must we all continue with the Basil Fawlty act, refusing to mention the war and all?

Dublin will likely win their fifth consecutive All-Ireland title next month but when will it become acceptable to finally address the notion that Dublin’s dominance may ultimately destroy the game?

After the six-in-a-row? Seven? Ten?

The golden generation argument has already been debunked with the backbone of the side – O’Callaghan, Mannion, Fenton, Kilkenny and McCaffrey – all capable of playing for another decade if they wish.

And bear in mind, for all their success at senior level Dublin have only won one minor All-Ireland title since 1984; if they can still manage to produce the greatest side of all time from such ‘slim pickings’ all logic points to a sustained period of dominance at the top of the food chain.

So, do we wait for another few years of dominance? Or do we wait until the game is on its last legs?

Because all the while the obvious advantages afforded to Dublin are tainting a legacy, as much of a pity for them as it is for everyone else.