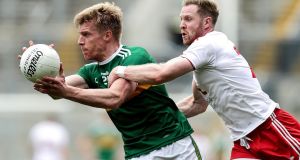 At half-time, Tommy Walsh trotted onto the field with the rest of the Kerry team. For Kingdom supporters, the big Tralee man was like an emblem of a more reassuring time. It’s 11 years now since Walsh made his debut in green and gold as a bustling and sensationally athletic forward. At that stage, Tyrone and Mickey Harte were the chief occupier of Kerry bad dreams.

Dublin could be placed somewhere between a rival to be enjoyed and a nostalgic memory. But, 35 minutes into Sunday’s semi-final, Kerry had problems on two fronts. After Saturday’s chilling display by the All-Ireland champions, it was hard not to wonder if their young Kerry team were ready to step up as the last county standing against Dublin’s claims for five in a row. And now that seemed like a remote worry anyway. Kerry had managed just five points and just two of those from play. Tyrone were four clear and looked more substantive and persuasive and just . . . ready.

As Walsh limbered up, thoughts turned to a cold day in Tuam in the early season. The big man had put in a solid, old-fashioned shift at full forward against Galway and afterwards was beaming from ear to ear. A football life that had yielded a deluge of early-season awards and three years as a professional ball player in Sydney had come full circle. Walsh was just happy to be involved with Kerry again. Afterwards, Peter Keane stood on the marshy field and deftly deflected questions about his decision to bring Walsh back into the fold after a three-year absence. In the grand Kerry management tradition, Keane deals with questions and enquiries the way a world-class batsman deals with a fast bowler, sending his responses travelling in all kinds of oblique angles.

“I thought he did well,” he said, wide-eyed, as though surprised by the enquiry.

Walsh had done extremely well. True, he snatched at his lone point attempt, which was hopelessly off target. But his presence gave Kerry’s full forward line a new shape and Tyrone’s defenders a fresh worry. He got into a little confrontation with Niall Morgan during a period when Kerry were steadily wrestling control of the day from Tyrone and, most critically, late on, he travelled deep outfield to collect two kick-outs from Shane Ryan when the Ulster men were a goal down and desperate for possession.

“I thought he did well,” Keane said carefully.

“I think he won every ball that went in and offloaded it. He was unlucky with the shot he took . . . maybe he just needed to steady himself a bit more. But I thought he did well in Navan too when he went in.”

With the retirement of Kieran Donaghy last September, bringing Walsh back in from the cold was an astute way of filling that void. Keane has used him sparingly but, after a year when all of the attention has been on Kerry’s crew of young and precocious attackers, it was the senior brigade who took this All-Ireland semi-final by the scruff of the neck.

From the moment Walsh played a ball for David Clifford to level the match at 0-12, Kerry had recovered their equilibrium

Walsh is 31 now. David Moran is also 31. Both came into the squad at the twilight of a rich, rich period for Kerry football. Paul Geaney and Stephen O’Brien were kids on Eamonn Fitzmaurice’s 2014 team that won an All-Ireland when they were supposed to be just learning the ropes. O’Brien has been the flame-carrier for Kerry all year and his 56th-minute sequence of play flipped this cagey match on his head, when he swooped to intercept a Kieran McGeary ball as Tyrone players charged forward to initiate an attack. Rather than push the ball on and feel happy with himself, O’Brien kept steaming upfield, exploiting the space created by Tyrone’s broken attack and was there to accept a pass from Moran before slotting home. A minute later, he added another point. From the moment Walsh played a ball for David Clifford to level the match at 0-12, Kerry had recovered their equilibrium. Once they established that goal advantage, they kept Tyrone at arms length, trading scores, wavering between a three- and four-point advantage through the six minutes of added time.

There was something fitting about the sight of Moran and Walsh, both sons of Kerry Golden Years figureheads, leading the team to what has suddenly become the definitive game in the elemental rivalry between city and country. Moran is, quite simply, the leader of this team.

It was a strange day, this: just 33,848 at an All-Ireland semi-final to watch a slow-burning semi-final which was conspicuously different in pace and intensity to its Saturday equivalent. Kerry’s All-Ireland preparation will be complicated by the bid to appeal one of the three black cards which, as it stands, would see O’Brien miss the All-Ireland on a technical suspension.

“Sure ’twould be very disappointing for the player himself if he was to miss it,” said Keane when asked about he felt about that prospect.

“You are asking me to talk about rules and technicalities and I know nothing about that. I’m doing my best here to talk about football and I’m bluffing away at that.”

Aesthetics and tradition demanded that if Dublin are to complete this five-in-a-row bid, it should be against Kerry. And if they are to fall one game short, then Kerry should be the crowd to trip them up. At half time, they had plenty of reasons to decide it wasn’t their day or their year. Their senior quartet thought differently. There is no turning back now.