Shock and awe as Dublin lay waste to Mayo 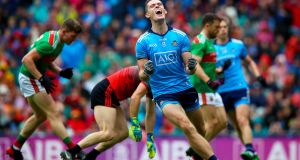 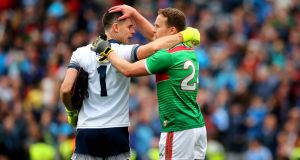 Maybe not 10 minutes that shook the world, but what Dublin did to Mayo in a darkly concentrated burst of matchless power and technique on Saturday evening left many of Gaelic football’s long held beliefs shaken to the core. The All-Ireland champions seemed to renew their vows to the shirt and to city by underlining four years of utter summer dominance with an unforgettable 10 minute show of collective power.

When it was over, Mayo’s resilience and dreams were reduced to ash and ruin. They had no answer and those watching across the country must have been left equally speechless and somewhat fearful of what lies ahead.

The presumption that time and success - and maybe the pressure of trying to do what Kerry ‘82 came within minutes of achieving - would weaken Dublin’s grip on this thing looked like a desperate grasping of straws. Through the first 35 minutes, Mayo had torn into Dublin like the hounds of hell. If this was to be the last stand of this particular generation of All-Ireland hunters, then they were going to make it count.

They held Dublin’s shimmering front six to just three points from play, they locked on to Dublin’s strike runners and, most significantly, they forced the champions into the concession of 10 frees which were coughed up to halt Mayo’s forward momentum. Patrick Durcan underlined a splendid season with as good a half hour as any Mayo footballer has given the cause and Stephen Coen and Colm Boyle were emblematic of the disregard for personal safety as Mayo hurled themselves into this. For a team that had looked like a shadow of itself earlier this summer, it was a remarkable howl of stubbornness and intent.

What happened over the half-time break? Certainly in the draughty corridors of Croke Park, Mayo’s vast travelling army must have convinced themselves that they were in a great place, leading 0-8 to 0-6 and full of bounce. In the Mayo dressing room, the conviction was presumably the same. But whatever thought process had occurred in Dublin’s collective mindset rendered all of that optimism and what-ifs pointless and, if not foolish, then innocent.

The power and cool, accurate finishing behind Con O’Callaghan’s two goals and the majestic point-taking by Paul Mannion will feature in the highlights reel of this day in the years and decades to come. But Ciaran Kilkenny was the furnace throughout this period. His fingerprints were all over that 10-minute spell, when he seemed to both challenge for every breaking ball and then immediately turn playmaker. He caused havoc.

It was Kilkenny who played the through-ball for O’Callaghan’s first goal, Kilkenny who hit the Cuala man again with a free for his second that was less a kick than a drone missile strike and Kilkenny who drew half the Mayo defence onto him before squaring a hand pass to set up Niall Scully for another goal chance which went whistling over Rob Hennelly’s bar.

The big Breaffy man was under severe pressure to find a county man with his restarts during this period and in truth, his only safe option would have been to thump the ball into the green and red sections of the Cusack stand. The danger was that Brian Fenton might have soared to intercept even that. Mayo couldn’t break out of their half and doubt, in all its guises, suddenly came screaming through them all. The best laid plans of mice and men often go awry.

This is particularly true when you can’t get your hands on the football. It became plain then that any team with designs on beating Dublin is going to have to devote hours and hours to working on kick-out plays in order to cope with their full frontal press. The press is based on psychological pressure: as one team begins to crumble, the aggressors become bolder, more brazen and more confident. That’s what happened during those mind-bending 10 minutes.

Mayo had been planning on a huge confrontation over the last 10 minutes, when Andy Moran and Kevin McLoughlin, Keith Higgins were on the field and Tom Parsons could be sent on to add to the emotional voltage of the evening. By the time those servants came in, all of Mayo’s dreams had turned to dust.

The strange thing was that there wasn’t much to say about it. It was like watching a family saloon car racing a formula one machine and somehow keeping pace for 10 laps. Somehow the public willed itself to believe that they could keep the pace up for the next 10 circuits also. Then came the engine screech.

There was an uncomfortable feeling, when the scoreboard read 2-12 to 0-8 with just 52 minutes gone, that the All-Ireland champions would visit a genuinely scarring experience on Mayo. Instead, Mayo kicked back with Lee Keegan delicately flicking a through ball from Aidan O’Shea beyond Cluxton, a goal for which the Mayo crowd managed to raise a cheer. The contest was over by then: you could see it by the look on Keegan’s face. Dublin’s intensity levels dropped a little also and the rate of scoring slowed dramatically over the closing 20 minutes.

The Hill sang on. These days can go on forever. Suddenly, the lock-ups with the five-in-a-row merchandise has begun to look like prudent forward planning rather than tempting fate. On Sunday morning, the sense of aftershock was still hanging around Croke Park as the tribes from Kerry and Tyrone gathered to fight for the right to face down Dublin as they seek to turn a five year streak into six or seven or who even knows.