Ireland’s fightback runs out of steam as Australia take series 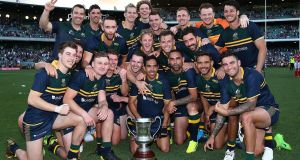 As the curtain came down on the 2017 series and Australia celebrated regaining the Cormac McAnallen trophy, the ledger in which the fortunes of the international game are painstakingly entered will record that the game perseveres.

The crowd of 30,116 was disappointing given that it was the last night at Perth’s Subiaco Oval, which is to be demolished, but there was a lively atmosphere as the outcome of the second test and for a long while the series itself hung in the balance.

For Ireland even the limited gratification of a test victory was denied them in the end, as a looseness in possession that had begun to haunt them in the second half cropped up again and in quick succession two turnovers saw Eddie Betts and Dayne Zorko fire a couple of overs that took Australia from a three-point deficit and into surplus.

They mightn’t have quite deserved to sweep the series but they were the better team overall and certainly merited winning it.

Ireland gave it about as much as they could. Aidan O’Shea led by example and was the team’s busiest player on the night. The defence tackled with more conviction than in the first. Zach Tuohy again took the battle to his AFL colleagues and Eoin Cadogan was prominent in clearing ball.

It looked very different in the first half. Ireland raided for two goals within a minute: Aidan O’Shea and Gary Brennan combined on both occasions, first for the latter to race through and slot the ball past Brendon Goddard and second, a slick combination from O’Shea’s kick for a Michael Murphy mark, which was moved quickly through Brennan for Chris Barrett in support to crack a shot into the net.

Now Ireland were 13-1 ahead and leading the series by two. When Shane Walsh, whose ability to run and kick at the right times posed a constant threat, slotted an over at the start of the second half, the team’s lead had stretched to 16, 33-17.

The story of the match is largely one of contrasting levels of composure. The Australians never seemed to panic and as they had done in Adelaide, methodically and gradually, accumulated scores. That they didn’t need goals to bridge the gap in the end says a lot about how successful they were but also about how Ireland lacked the same attributes when they needed to slow down or keep possession.

The international game is so relentless in its pace and lack of resting places that it’s understandable how an inexperienced team can panic in the face of the constant pressure and start scrambling the ball any way they can to get rid of it.

When the hunting packs arrive it’s often as good as it gets for a defender to get a meaty hoof on the ball and drive it as far away as possible but that simply returns the ball to the opposition and the press starts again.

There were also rushes of blood to the head and marks were run rather than taken, putting hard-won possession back in play.

Ireland manager Joe Kernan was annoyed afterwards at some of the decisions taken by the match officials, feeling strongly that Donegal’s Michael Murphy didn’t get adequate protection and that Aidan O’Shea had been hit high in a late tackle by Australia’s Nat Fyfe.

Even though he emphasised that Australia deserved the win and that Ireland had effectively dug their own grave, it was a pity that controversy arose because apart from some pushing and shoving leaving the field at half-time the match was disciplined, even if it demonstrated more edge than the first test.

Australia’s Joel Selwood received a black card before half-time for a challenge on Barrett that was indeed late and high. The decision was confirmed by the South African video official Ian Curlewis, who also adjudicated that the complained-of hit on O’Shea had not merited a black card. Both decisions appeared fair.

Fyfe had another excellent outing and won the Jim Stynes medal for his country’s player of the series. He won more marks and contested possessions than anyone else on the field.

Ireland battled hard, though. They were more competitive at centrefield than in the first test with O’Shea and Kevin Feely winning a decent supply themselves but overall the team were beaten on the ability to win possessions in dangerous areas of the field.

Again Murphy and Conor McManus, who with 16 was the team’s top scorer for the fifth successive test and won the GAA medal, posed a threat up front but there was no consistent ability to get the ball into the danger zone. The two goals set Ireland up but they needed to exert more sustained pressure.

Nonetheless they led 30-17 at half-time and had every opportunity to press on. Even in the third quarter when the anticipated Australian threat materialised - Zorko, Betts, the excellent Chad Wingard and Fyfe all kicking overs to reduce the margin to two, 33-31 - Ireland rallied and took four of the five scores before the end.

McManus took the last of those, a scarcely believable shot from out on the left sideline.

There could have been goals but Goddard, who had been exposed for the goals by unfamiliar one-on-one situations, produced two excellent saves - one from Walsh, who had been placed by Murphy to run in along the endline. A goal at this point would have set all Australia’s third-quarter domination to nothing.

Instead they finished with the margin down to seven, 34-41 revived and sensing blood in the final quarter.

Again it was down to composure. Ireland lost the ball and took wrong options when attacking, trying for unlikely overs - or at least failing to kick them. Three behinds, the one-point reward for kicking wides, were registered in this period when greater accuracy was badly needed.

Although Niall Morgan was guilty of a few inaccuracies he kept his goal really effectively, taking a brilliant high catch at one stage and making a fine save in the 63rd minute from Wingard.

Australia finally ran Ireland down when Luke Shuey corkscrewed a spectacular shot over the bar in the 66th minute, a fitting score to push his team ahead for the first time on the evening. Ireland resisted but the momentum was against them and the late hits on the scoreboard finally overpowered them.

Australia’s Nat Fyfe and Ireland’s Conor McManus were presented with the Jim Synes and GAA medals respectively as their countries’ players of the series.