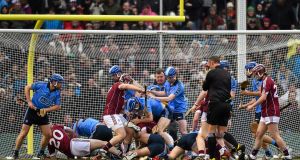 Dublin and Galway during the Fenway Hurling Classic in Boston on November 22nd, 2015, The game can be remembered for the brawl between the teams. Photograph: Ray McManus/Sportsfile

As the oldest baseball stadium in the US, Fenway Park is no stranger to what might be considered by some as the patriot game. And not just baseball.

Hurling made its debut in the famed Boston grounds two years ago, and returns for Sunday’s AIG Fenway Hurling Classic – billed locally as a contest in the ancient warrior game. It’s a little more modern than that, although it has already shown a certain warrior aspect.

The Super-11s version of the game was only dreamed up four years, designed for ex-pats and overseas players who might otherwise never get to grips with it. Cork All-Ireland winning player and manager Donal O’Grady helped draw up the rules, and while it may eventually facilitate some international dimension to the game, Super-11s hurling is all about breaking new ground.

“This is not about trying to get hurling into the Olympics or anything like that,” says O’Grady. “It’s essentially a shortened version of hurling, still very much in its infancy, and designed for overseas players, be they first generation Irish, second generation, or anyone who wants to play the game.

“And it can be played all over the world because it doesn’t need the wide dimensions of the GAA pitch, and is played with goals only. We tailored the rules to suit all that such as ground hurling; overhead hurling is not part of it.

“It’s not just an exhibition game either, but one that people can easily get involved with, play under the rules, in a competitive sense. There might also be some Americans who might play hockey or lacrosse who might cross over.

“It is still baby steps really, but it got a very positive reaction in Boston in 2015. People here were very grateful the game of hurling was brought to them. It’s also about fostering the relationship between the countries.”

That game two years ago between Galway and Dublin might best be remembered for the warrior-type brawl which broke out between the teams.

Sunday’s competition has been expanded this year to involve four counties – All-Ireland champions Galway playing Dublin in one semi-final (5.30pm Irish time) and 2016 champions Tipperary playing Clare in the other (6.30pm), the winners then playing in the final (8pm). All three games will be televised live in the US (on NESN) and in Ireland (on TG4).

O’Grady is involved in an official capacity on Sunday as the television match official (TMO), one aspect of the Super-11s game he believes could be brought into the game proper, especially given the expanded hurling championship next summer.

“We’ve used Super-11s before as a sounding board to tweak the rules. The one-on-one penalty strike, that we have now, came directly from Super-11s. The TMO also works well in the Super-11s, and I think should be brought into the 15 a side game as well.

“It’s simple enough. If the referee wants to clarify something he just gets in contact with the TMO. I know Paraic Duffy is against this, but this is not like rugby, where it might take all sorts of TV angles to decide something. This is typically more straightforward – some crucial decision.

“And with the new structures in 2018 it’s even more important we give referees all the help they can get. And they way I see it, TMO’s are already there in the form of Hawk-Eye.”

The game is played with 11 players on each side, with unlimited replacements from the 26-man panel.

Soccer goals are used, with sides awarded five points for a goal outside the defensive zone (20 yards) and three points for goals inside the zone.

There is also a two-minute sin bin for players who commit a foul, another aspect of the game O’Grady believes should be introduced to the 15 a side game

Sunday’s teams will play for a new Players Champions Cup: the intention is to make it an annual event. It is also the first competitive game for new Dublin hurling manager Pat Gilroy, and O’Grady believes all four teams have been serious about the preparation.

“I know all four counties have been adopting to the rules,” says Grady. “This game has its critics, I know, but I think unfairly because they’re trying to make a direct comparison with the game in Ireland, which it’s not. The Super-11s was never about that. Every sport has a spin-off like this, whether it’s rugby sevens or whatever.

“The skill level is mostly a possession skill, and the fitness levels are very high because it’s non-stop. The ball is in play 95 per cent of the time, and it’s all speed. The skill of the goalkeeper counts for a lot as well.

“I think it’s an excellent concept. Now, I might say that because I’m involved from the beginning, but at least this is a chance for the game of hurling to be taken overseas because for now the 15 a side game just doesn’t transfer abroad, such is the skill level, the size of the pitch, all that.

“It’s still in its early days, but it’s all about developing the game abroad, including say with college teams in the US. At the same time we wanted this to be a serious game and competitive, but also a social element as well.”

Each team fields 11 players, with unlimited replacements from the 26-man panel.

Soccer goals are used, with teams awarded five points for a goal outside the defensive zone (20 yards) and three points for goals inside the zone.

Two halves of 20 minutes each.

Players are not allowed to kick the ball or handpass the ball if they have just received a handpass.

There is a “tap and go” where a free is awarded; the player can just tap the ball off his hurley and go.

Referee decisions can be checked with a television match official (TMO).

Fouls result in the player spending two minutes in the sin bin.