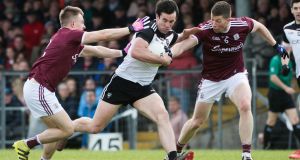 You could charitably say that this Connacht semi-final was poised on a knife edge in the second half. But if so, it was a blunted and corroded kind of knife.

Yes, this Sligo team, young and newly relegated to division four, briefly came within a point of a Galway team touted as All-Ireland dark horses.

Yes, there were Galway voices frustrated with the infinite patience of their starlets in the face of the defensive alignment which Paul Taylor had assembled.

And yes, there were periods of play which will have further convinced that the game of football is going to the dogs.

But in the end, this one-sided Connacht semi-final was simply further proof that the game is changing at pace.

Take one move: four minutes into the second half. Galway goalkeeper Bernard Power surveys his options with a kick out. He locates Antaine Ó Laoi, who clips a beautiful inside pass to Danny Cummins. The Claregalway man plays in Shane Walsh, who strikes a wide. Nobody pays much heed but the speed and precision with which Galway have moved the ball from one goal to the other is superb and menacing. And it turns out to be a prelude.

Two minutes later, Walsh does land a point. Then Liam Silke, notionally a corner back, adds a goal to add to his two points from play. The young Sligo team are still reeling from this disappointment when a Michael Daly shot drops from the post and into Johnny Heaney’s hands. Another goal for the favourites. Game over. A sense of inevitability falls over this cool May afternoon under Ben Bulben.

“We had a five-minute period in the second half where Galway won the game and we lost the game,” said Sligo manager Taylor, who will have plenty of conversational points when he resumes his election campaign on the doorsteps of Sligo town next week.

“I don’t think the scoreline was a true reflection on the game today. Look, obviously we didn’t do enough in the first half, nine or 10 wides in all and we kicked five into the keeper’s hands and you can’t do that at this level. But the boys battled hard.

“I don’t think we got any luck either – that ball that came off the post for Galway’s second goal. But the lads gave everything. We had nine starters and 10 or 11 who played in the 2017 U-21 Connacht final. They have a lot to learn. But at the same time they prepared very, very hard for this game. I feel for them.”

Who wouldn’t? The old game is in a strange place. This, after all, was Sligo’s day in the sun – even if it was overcast and rainy. You think of the many nights of training, the car journeys, the sprints. And it’s a tough slog. The glory is fleeting.

Taylor was one of the more impressive players in Connacht for many years but even the brightest of teams he played on struggled to live with maroon teams. And that gap has become gaping. Sligo had some good moments here – a strong first half from Paul Kilcoyne and two terrific points fired into the breeze by Niall Murphy, for instance. But Taylor wasn’t surprised when asked about the advent of a two-tier system.

“I suppose I feel it is something that is probably around the corner,” he said.

“My thoughts are that we would all like to be up there with the big teams but at the moment there are five or six teams that are probably going away from everybody else. Regardless of who or where you are it is difficult and it is probably getting more difficult. Maybe it is around the corner. I am not going to say right now whether I am in favour or not because its something I haven’t thought much about.”

It’s hard to know what more Taylor could have done. He sent out a young, well organised team to lie deep and stay in the contest. They did that, trailing 0-3 to 0-5 at the break.

In the first fifteen minutes, referee Ciarán Bannagan found himself handing out yellow cards with the same velocity as the political hopefuls handed out fliers outside Markievicz. The chief disappointment for Galway’s travelling support was the sight of Kieran Molloy leaving with a dislocated shoulder after just 15 minutes. “Kieran is as tough as nails,” Kevin Walsh said afterwards. “He’ll battle back as quickly as possible.”

Despite the unpromising first half, there was an overwhelming sense that Galway would rouse themselves eventually. And that’s what happened. The goals put a gloss on the score. The crowd became quiet. The drama was minimal.