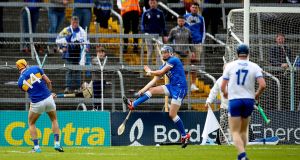 For all the singing around this Munster hurling championship format it doesn’t take much for some of the music to suddenly stop. Especially with Tipperary going on another brilliant solo run like this.

After hitting Munster champions Cork with 2-28 last Sunday, Liam Sheedy’s team went better again and hit Waterford with 2-30 – winning by double scores, or an 18-point margin. Take your pick. With 2-24 coming from open play, some deft placed balls from Jason Forde and Ronan Maher mixed in for good measure, it again had Sheedy’s class of management and quality of performance written all over it.

With that Tipp may also have ended Waterford’s lasting interest in the championship, even with two games remaining, for the second season running. After their opening defeat to Clare, Waterford have a weekend hiatus before facing All-Ireland champions Limerick. Manager Páraic Fanning wasn’t entirely disconsolate, only admitted Waterford were fighting for their lives.

That 2-30 total is accurate for Tipperary and a little deceiving on the game: down to 14 men after losing Conor Gleeson to a second yellow card on 29 minutes, Waterford raged hard early in the second half, the light already going out on their summer, and on 53 minutes got it back to a three-point game, 0-20 to 0-17, Páuric Mahony’s frees doing the job the scoreboard.

Only for Tipp to be suddenly awakened, responding with 1-7 without reply, the beautifully worked goal finished by Forde, while Waterford went 15 minutes without a score. No way back from that, legs and heart worn out, Waterford could only watch in vain as their opponents closed out with score after score, their second goal finished by captain Séamus Callanan.

Not that Sheedy is about to get lured into thinking his side are suddenly the finished article: “Certainly not. Obviously we got an extra man midway through the first half, but they got the two scores before half-time to bring it back to six, and they left themselves well in the game at half-time.

“The first goal gave us that bit of breathing space, and we got some nice scores after that. Look, in fairness to the lads, that’s two weeks back to back and it’s tough. And I’m very pleased with the bench’s contribution.

“From our point of view, we felt – as a group – it was important to try and deliver back-to-back performances in this Munster Championship. Again, it doesn’t guarantee us to get anywhere but it does give us four points on the board. I think, overall, and it was a very, very spirited performance and the lads worked hard.”

They certainly did that: after 10 different scores against Cork, Tipp finished with nine here, Forde brilliant with his 1-9, Michael Breen hitting a super six points from midfield, three in either half. Their inside forwards too, picking up where they left off against Cork: John ‘Bubbles’ O’Dwyer adding 0-4, John McGrath 0-5, with two more scores coming off the bench in the form of Jake Morris and Barry Heffernan.

“Anyone looking at these guys play over the last number of years, there are some really, really good forwards there,” added Sheedy. “They are playing very well as a unit and some of their quality of striking today was top class. Some of the scores weren’t easy to convert but they converted those scores really well. The key thing is that it is very competitive and when you have competition it really helps the make-up of our forward line.

“We kept the scoreboard ticking but there was long periods where we struggled to get scores and it was just the last 10 minutes, where we really exploded and gave the scoreline somewhat of an unreal look in the finish.”

Before another bumper crowd of 22,833, Tipperary found themselves six points up at the break, 0-16 to 0-10, already with a sense Waterford were struggling to find the necessary scores as quickly. Austin Gleeson didn’t make his presence properly felt until his point on the half hour, and while Tomás Ryan and Jamie Barron found some scores the direct route, a lot more was going astray.

They were gifting Tipp a little too much also, goalkeeper Stephen O’Keeffe firing one puck-out straight over the sideline midway through the first half, only for Ronan Maher to sent the sideline cut straight back between posts. Five minutes later Forde also pounced on another O’Keeffe puck-out for a clean point.

Not long after that they lost Gleeson, who had stuck like bubblegum to Callanan. Both players were booked for an off-the-ball incident on 26 minutes, in front of the Tipp goalmouth, out of view of match referee John Keenan, but enough to merit the attention of the umpire. Neither player seemed to bothered, but Gleeson was made pay again on 29 minutes for that second yellow, after hauling down Patrick Maher.

Waterford made a late surge to close the gap to something a little more presentable, Patrick Curran breaking into space in front of goal minutes before half-time, only for his shot to shoot across the goal after hitting bottom of the upright. Curran took a knock shortly afterwards and didn’t come out for the second half.

“A very tough day, yeah,” admitted Fanning, the Waterford manager looking down but not yet out. “It’s funny, with 20 minutes to go or so, we dragged ourselves back into it, had a lot of momentum, then it just petered out, maybe our legs went a little, and maybe them having the extra man that was part of it.

“They got a foothold again and they really opened up in the last few minutes. At that stage we were struggling to keep on our legs because of the overlaps and things, that was a bit of a difficulty. As regards picking up those type of lads, they’re as hurting inside as we are over the result. So there’s two ways we can go. We can leave the season peter out, or we can fight for our lives, and I’d be very, very surprised if it’s anything other than us fighting for our lives in Walsh Park when we play Limerick and when we play Cork.

“Right now, it’s a bit raw, so we’ve got to think back over the game, watch the video. It’s not a time now for trying to dissect a game within two or three minutes. I wouldn’t do it if we won and I’m not going to do it now when we’ve lost like that either.

“We were very happy with our preparations and everything into the championship, as I’ve said to the lads inside there isn’t a whole lot we would change about the way we prepared. But we’ve had two bad defeats now I suppose, particularly this one, so now we’ve got to pick ourselves up.”

Before the music dies completely.