GAA rules committee is due a bit more respect

Evidence-based guiding principles are behind the proposed rule changes 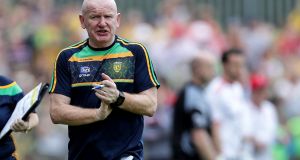 Declan Bonner: “It’s crazy, I don’t know how 10 men can sit around a table and come up with the three handpass rule. They can’t have much to do,” says the Donegal manager. Photograph: Laszlo Geczo/Inpho

Very little tweaks the noses of Official GAA more bitterly than talking about the disconnect between Croke Park and the rest of the association.

Nothing is surer to have them rolling their eyes and grinding their teeth and pointing out that they are all club members too. Prick them and they do bleed. Tickle them and they do laugh. Well, some of them anyway.

Yet it’s hard to think of a situation that better sums up that very real disconnect than the current and impending impasse over the proposed changes to the football rules. So far, the pre-season games have plodded along under the new arrangements and, predictably enough, the reaction has been of the scorched earth variety.

“It’s such a waste of time,” was Donegal manager Declan Bonner’s take.

“It’s crazy, I don’t know how 10 men can sit around a table and come up with the three handpass rule. They can’t have much to do.”

“To be introducing five rule changes at the same time is just simply unrealistic,” said Turlough O’Brien, the Carlow manager.

“It is outrageous to be proposing so many different changes at the same time. It’s nonsensical. I think there is a tactical ploy at play here by proposing five, because the committee know they won’t get five through. So they are hoping to get the one or two through that they really want, so instead of just telling us what it is they want they have proposed these five. Some of what is being proposed is just bizarre.”

And on and on. Kevin Walsh, James Horan, Peter Keane have all had their goes, essaying various degrees of bafflement and outrage.

Walsh reckons it’s all down to TV pundits and an effort to appease them. If it is, it hasn’t worked – see Joe Brolly scattergun scathing reviews in his Gaelic Life column last Thursday, reheated for yesterday’s Sindo.

In all of this, the really interesting aspect is the complete derision people seem to have for the committee that came up with the rules. When someone as affable and fair-minded as Turlough O’Brien is suggesting ulterior motives and calling the whole thing bizarre, you have sit up and take notice.

Can these managers possibly feel this much ill-will towards a simple boring old rules committee? Almost certainly not. It feels a lot more likely that it all comes back to the dreaded disconnect. The age-old issue of units of the association feeling they are being talked down to by the suits and not liking it one bit.

Whatever about the wider picture, on this specific issue the GAA have every right to wonder what more they can do. The suits make plenty of errors, forced and unforced, and they very often deserve every bit of the kicking they get. Not to mention they’re more than big enough and ugly enough to take it. But whatever anyone thinks about the rule proposals, the committee that came up with them are surely due a bit more respect than they’re getting.

At the GAA’s Games Development Conference in Croke Park on Saturday, the head of the committee David Hassan gave a presentation on how they arrived at the proposals they came up with.

He spoke for around half an hour and was followed by Rob Carroll, the performance analyst whose exhaustive statistical work provided the committee with empirical evidence of current trends within the sport. None of this is top-of-the-head stuff.

Interestingly, for all the blood and thunder and outrage, when Hassan and Carroll gave their presentation on Saturday, they did so to a half-empty room.

There were well over 1,000 delegates at the conference but at a rough count, only around 500 of them came along to the Nally Suite for the rules chat. Maybe this isn’t quite the scandal the intercounty managers are making it out to be.

At one point, Hassan brought up a slide showing six other sports that had changed their playing rules within the past six months – soccer, golf, rugby, cricket, Aussie Rules, tennis. With the exception of AFL, you’re talking about sports with a global profile.

Hassan made the point that very few of those sports had made any real effort to enter into conversations with their players or managers/coaches on their rule changes. In most cases, they made their decision and brought in the rules and everybody just got used to them.

Compare that to what the GAA have done here and the rules committee in particular. They wrote to every county board to canvass opinion. Cork, Roscommon, Wexford and others all came back with ideas on restriction of the handpass.

They wrote to every intercounty manager last October to seek their thoughts and suggestions. They got just 12 responses.

Yet the way managers have been talking over the past few weeks, you’d think these ideas were plucked out of thin air. It’s a well-worn stat at this stage but it bears repeating – Carroll’s numbers come from having watched 322 matches from the past eight seasons and the stats are stark when you see them down in black and white. As recently as 2011, 86 per cent of kick-outs crossed the 45. In 2018, that number was 56 per cent.

In the 2018 All-Ireland final between Dublin and Tyrone, handpasses made up 75 per cent of transfers of possession. There was an average of just under two kick-passes a minute in that final and across the afternoon there were only 20 kick-passes made in which possession was in any way up for grabs.

It’s a documented fact that contested possession has become a rarity in the sport.

Disagree with the committee all you like but at least respect the fact that they are working off evidence-based guiding principles. At least give them credit for more than just “sitting around a table and coming up with a three-handpass rule”.

To do otherwise is to take wider frustrations with Croke Park out on a group of people who are doing nothing more than trying to improve the game.