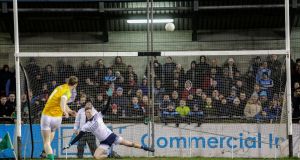 Old rivalries never die and even in the O’Byrne Cup, on a windswept evening in January, Dublin simply refused to accede to their neighbours Meath, edging a thriller.

Trailing at one stage by five points, and drawing players from their development panel, the All-Ireland holders might have accepted a battling defeat and signed off on pre-season duties.

Instead, they pegged Meath back and in an intriguing second-half the sides were level five times, the fifth of which arrived when Mickey Newman pointed for the visitors in the 76th minute.

It meant the scores finished level and for the first time in Leinster, and only the second time in Gaelic football, a penalty shoot-out was used to determine a winner.

Dublin ultimately prevailed, scoring all three of their penalties compared to three misses from Meath’s four kicks. Sean Tobin was the only Meath player to convert his penalty while former Under-21 star Aaron Byrne, Fingallians man Oisin Lynch and Conor McHugh all hit the net for Dublin.

It brought an entertaining evening to a close and ensured that Dublin will play Westmeath in next Friday night’s final.

For the third season running, Paul Clarke was on the line for Dublin and in charge of the rookie group with Jim Gavin’s 2018 panel holidaying in the US since the new year.

Conor Mullally was Dublin’s only starter who played in the 2018 Championship though Andrew McGowan and McHugh all came on.

Meath had eight players in their lineup who featured in last year’s Championship and were better initially, running up a 1-4 to 0-2 lead after just 11 minutes.

Newman kicked two of their points and Graham Reilly, on as a blood substitute, netted in the eighth minute.

Former captain Reilly scored 1-1 as a blood substitute before coming for the second-half and adding another point.

Dublin found their groove to dominate the period before half-time and fought back to level it at 1-7 apiece, McDaid palming in their goal after a flowing move.

The quality dropped in the second-half as the tension increased in front of an estimated crowd of 6,000.

The pattern of play was that Dublin took the lead and Meath cancelled it out with an equaliser. McHugh thought he’d grabbed the winner for Dublin in the 74th minute when he fisted them in front but Newman hit that leveller from a free after a foul on Donal Keogan. It meant penalties were required and Dublin were surprisingly at their ease with a 100 per cent record as Meath fluffed their lines badly.