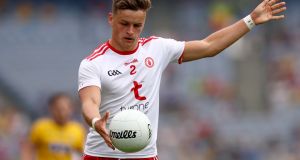 Michael McKernan: The Young Footballer of the Year nominee is named in the Tyrone team to face Derry this weekend. Photograph: James Crombie/Inpho

Clare v Cork, Miltown-Malbay – After all the coverage of Cork’s football vision of the future, it’s down to brass tacks here. With Kerry sitting this out for the second year, the next best teams in Munster contest another final. Last year, Clare came back from 10 points down to push the final to the wire and it should be equally competitive this weekend. Ronan McCarthy retains only Tom Clancy (Clonakilty) from the side that dismissed Limerick in the semi-final.
Verdict: Cork

Westmeath v Longford, The Downs – New managers for the counties and from the archives, a reminder that both John Cooney and Pádraic Davis played against each other in the final of this competition 19 years ago. Davis and Longford came out on top and Cooney got himself sent off. He can make amends here, as Westmeath have looked good so far whereas Davis has been getting used to life without the Mullinalaghta players, pending the All-Ireland club series.
Verdict: Westmeath

Dublin v Meath, Parnell Park, 7.0 – Dublin have used the competition to great effect in the past two years, effectively as a trial for the senior panel - winning the title in 2017 but not getting out of the group last year. The developmental nature of the approach leaves holders Meath as favourites to reach the final, an unusual state of affairs when Dublin play Leinster opposition, although the All-Ireland champions haven’t had the benefit of pool matches and this is their first match.
Verdict: Meath

Clare v Tipperary, Gaelic Grounds – A big year beckons for both teams. Clare got back to Croke Park in 2018 and came close in the scheme of things. Tipp, under the new management of former All-Ireland winning boss Liam Sheedy and with a supply from the Under-21 champions, such as Mark Kehoe and Killian O’Dwyer, will expect to get back to the table – at least. Clare were mostly impressive in defeating Waterford last week even if they allowed the opposition back into the match in the second half and nearly paid the price. After the drift of last year, expect Tipp to show a lot more urgency.
Verdict: Tipperary

Wexford v Kilkenny, Bellefield, Enniscorthy – Last year appeared to reverse the trend of 2017 which had seen Wexford get the upper hand on Kilkenny and there will be plenty of interest to see how the rivalry, which has produced some great contests, goes this season. Wexford aren’t at full tilt with a number of first-team players out of action until after the start of the league but Brian Cody has similar issues with club commitments and injury to his two top defenders Cillian Buckley and Pádraig Walsh.
Verdict: Kilkenny

Dublin v Galway, Parnell Park – A resonant encounter between former Galway selector Mattie Kenny, given his first county management post by Dublin after a golden few years with Cuala. He’s been getting to grips with the panel and so far, so good with functional wins against Offaly, Carlow and Laois. Galway are down virtually all of their All-Ireland team so this will be an experimental contest and an early opportunity for a Dublin statement.
Verdict: Dublin

Derry v Tyrone, Athletic Grounds – Although Mickey Harte has been throwing an eye over potential recruits the last two matches have seen more of the established players drifting back into action and the process continues with Young Footballer of the Year nominee Michael McKernan named for a first start in this game along with Lee Brennan. This a competition the Tyrone manager takes seriously, as Derry will be aware – hard to believe that there’s now the length of the league between the counties – having lost to them at home by nine points before Christmas.
Verdict: Tyrone

Armagh v Donegal, Healy Park – Armagh have shown good form so far and touched off Monaghan in the final pool match but Donegal have been tipping away nicely, blending some aspiring panellists with more experienced players while recording impressive wins. It looks a likely rematch of last year’s final.
Verdict: Donegal.

Galway v Mayo, Tuam Stadium, 1.30 – The counties have been tearing away at each other in recent years with an element of needle emerging in a number of matches, most obviously last season’s FBD and league encounters. Since James Horan, now reinstalled as Mayo manager, stepped down in 2014 the county has managed only one win against the neighbours and that was now four years ago.

Galway haven’t impressed sufficiently on the bigger stage to suggest that this is indisputably their era and Horan will certainly target that. His developmental selection last week nearly came unstuck against Leitrim but there’ll be more at stake here than is immediately evident.
Verdict: Mayo

Roscommon v Sligo, Dr Hyde Park, 1.30 – Two new managers in action. Anthony Cunningham was a high-profile appointment in Roscommon and has the added urgency of preparing for a season in Division One, starting with Mayo.

He has been looking at the playing strength and dealing with the usual comings and goings in the county, including the retirement of veteran defender Seán MacDermott. Sligo counterpart Paul Taylor was ruing during the week the departure of talented AFL recruit Red Óg Murphy to the Kangaroos but his focus will be on the trip to Carlow in a fortnight.
Verdict: Roscommon