An eternal Dublin empire is nothing to be excited about

Any way you spin it, no sport is helped at all by the outright domination of one team 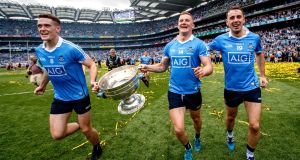 Down in the tunnel, as the Dublin players bounce out of the dressing room, the annual do-see-do to get a word or two about how it all feels rolls on into the night. Jack McCaffrey skates past at much the same pace he’s been torching the sidelines out on the pitch all day. “No thanks, lads, I’m going drinking,” he announces.

Well, there’s no need to rub it in, Jack.

Stephen Cluxton marches past, safe in the knowledge that we gave up asking somewhere around the mid-1990s. Bernard Brogan has a handshake and a backslap and a smile for everyone as he keeps a steady march to the players’ lounge. Eventually, Ciarán Kilkenny and Brian Fenton stop and break it down a little for us.

“Completely off our feet after it,” Kilkenny says, stretching his hands behind his head as he talks, as though he’s trying to elongate the muscles in his back all the while. “I’m absolutely drained here now. I’m just on cloud nine, I can’t really put a sentence together. I’m just ecstatic about the victory and how special it feels. That’s really it.

“I’m absolutely shattered. The emotions of the week leading into the game and then the game itself. Tyrone really had a massive purple patch in the game in the second half and brought it back to four points. To finish the way we did was really satisfying. The adrenaline is still pumping, and I know tonight, you’re enjoying it but you’re just shattered.”

Everything big is small on some level. Dublin are champions once again, the four-in-a-row in the bag, nobody entirely sure what can happen to prevent it becoming five, six, whatever. Ciarán Kilkenny is 25 and has five All-Irelands to his name. He could feasibly retire with 10. That sounds kind of mad, of course, but would you bet big money against it? No, you would not.

Any way you spin it, this is not a cause for celebration. No sport is helped by the outright domination of one team. It was no good for Formula One when Michael Schumacher was carrying all before him, and though we can all admire the All Blacks, the idea of another procession in next year’s World Cup eventually becomes wearying. An eternal Dubs empire is nothing to be excited about.

Early in his time with Dublin, this column met Kilkenny for a one-on-one through some sponsor or other. We sat on a picnic table at a club day he was involved in out in the ’burbs somewhere and he chatted away amiably enough. He was only 20 at the time, so it was pointless expecting to get anywhere other than just about piercing the surface of him.

But even just in that snatched half hour back in the summer of 2013, you could glean enough from him to know that this thing was his life and he was living the hell out of it. He told a story at one stage about the first time he played in this stadium as a kid.

“I played in Croke Park when I was eight years of age,” he said. “I was playing midfield for Scoil Olibhéar in the final of the Cumann na mBunscoil. It’s a massive thing for kids that age. I was down at it handing out medals there one of the days and you can just see how big a deal it is.

“I remember it very well. I was so nervous. I remember having dreams about the stadium the night before. I had relations who had played there before – my father’s first cousin was Seán Purcell. So even though you’re only eight, you’re there thinking that you can go and do what they did before you.”

How could you not have a little time for a lad like that? This is the problem with shaking our fists at the sky and rending our garments at the hated Dubs. On a personal level, they’re impossible to hate. Even a pantomime villain like Philly McMahon, who was wearing a T-shirt afterwards in memory of his father, who died during the summer, has turned most people around at this stage.

But at the back of it all, the threat of an all-conquering, all-monstering Dublin is real. It should not be beyond the wit of us all to acknowledge that the Dublin football team has in-built advantages that are unavailable to others and that their players are massively skilled, hugely admirable footballers who work themselves to the limit. It is no slight on Ciarán Kilkenny or anyone else to posit that a future in which he keeps adding relentlessly to his Celtic Cross tally is not an enticing prospect.

Just once, you’d love somebody in the GAA to cop to the reality of it. The evidence in front of our eyes shows Dublin’s age profile getting younger as they add All-Irelands, which is unprecedented in the history of the game. The team that started yesterday is, on average, six months younger than the team that started the first final in the four-in-a-row. The notion that this is a one-off golden generation is demonstrably wrong.