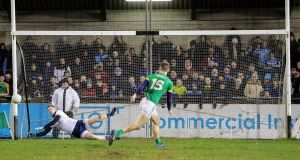 If Dublin make history as five-in-a-row All-Ireland winners this year, Paul Clarke probably won’t be the first person Stephen Cluxton thanks in his victory speech.

Yet the former Dublin forward is an increasingly important figure in Jim Gavin’s management team and continues to fulfil a very important function each January.

For the third season running, he’s managing Dublin in the O’Byrne Cup, selecting from a development squad of rookie and fringe talents.

Clarke’s group won the competition in 2017, memorably putting Niall Scully on the road to senior stardom.

Last year, it was Brian Howard that emerged from Clarke’s January pack to set the season alight and the Raheny man ended the year as an All Star.

So when Dublin wrap up their latest O’Byrne Cup campaign next Friday evening after facing Westmeath in the final, Gavin will be more than a little interested to learn which players Clarke believes might make the grade.

Perhaps one of them will be Ryan Basquel, who scored four points in Saturday’s semi-final win over old rivals Meath, a game that was decided by a novel penalty shootout.

“Every one of that squad put in a hard shift last week, they were training well,” said Clarke, just back from the official team holiday on Friday. “They played very well as a unit. You could look at them individually but the whole principle is to go out and give it 100 per cent, give loads of hard work, loads of effort, loads of enthusiasm and they all did that. They gave that in bucket loads.

“We’ll look forward to next weekend. We’ll go and mend a few wounds and then see how guys feel because there’s some Sigerson games next Friday and we’ll have to see who is available to us.

“It will probably be down to Jim Gavin but I think we’ll be working with the same squad we have now for the final.”

Meath led 1-4 to 0-2 early on after Graham Reilly’s goal but were pegged back to level terms at 1-7 apiece at half-time.

They were tied five more times in the second half before Conor McHugh fisted Dublin ahead in the 74th minute.

Meath refused to die and Donal Keogan drew the foul that Mickey Newman converted to force the penalty drama.

That was an anti-climax as Aaron Byrne and McHugh, the 2017 and 2014 All-Ireland under-21 player of the year winners, slotted their kicks along with Oisín Lynch while Meath wasted three of their four.

“I wouldn’t like a Championship game to be decided like that,” said Meath manager Andy McEntee. “I think both teams would have got value out of another 20 minutes.”