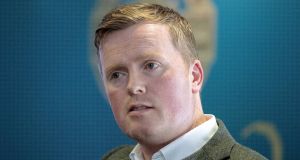 David Hassan, chair of the Standing Committee on Playing Rules: “I’d be disappointed if the views of the committee were simply founded on opinion or individual, personal experience.” Photograph: Laszlo Geczo/Inpho

The GAA’s highly regarded (sold out, again) annual Games Development Conference gets under way this weekend in Croke Park, and there may be particular interest in one of the early afternoon parallel sessions, “The evolution of Gaelic Football – What type of game do we want?”

Presenting the paper is David Hassan, professor of sport policy and management at Ulster University, a distinguished academic but best known in the current GAA context as the chair of the Standing Committee on the Playing Rules (SCPR), authors of the experimental football rules being trialled at present.

A former dual player with Derry, he also has considerable coaching experience and says that the subject of this weekend’s paper has dovetailed with his work on the SCPR.

“Watching football in recent times, a person starts to think, how is this game evolving, changing? Is it going in a direction that respects the heritage of the game but at the same time is realistic about looking to the future? I had those thoughts in my professional life prior to my appointment as chair of the committee.

“The activities of 2018 have to some extent crystallised those thoughts and that’s where the paper I present on Saturday has come from – a combination of two factors.”

The five experimental rules have caused controversy, with particular focus on the limitation of hand-passing sequences to three. Many managers have spoken out against the proposal, with some calling for the trial to be discontinued before the national league begins at the end of January.

Hassan says that he isn’t dismayed by this negativity, pointing out that the SCPR based its proposals on statistical analysis of the game as well as on a widespread consultation process.

“I’d be despondent if the process we underwent wasn’t as robust as it was. To some extent the work of SCPR was relatively straightforward. It was a matter of surveying the constituent parts, the boards, engaging the players, the managers and so forth, and looking entirely objectively at the data set. It’s a relatively straight line from that to the proposals.

“I’d be disappointed if the views of the committee were simply founded on opinion or individual, personal experience.

“We put the five recommendations before Central Council and each was individually interrogated and a democratic vote taken.”

He also revealed that Rob Carroll, the statistician whose research underpins the experimental rules, has been asked to conduct an independent monitoring of the matches in the secondary provincial competitions running in January. There will be a detailed data-based review of the matches, which Carroll has independently chosen so that the SCPR can’t be accused of conditioning the findings.

This will be presented to Central Council on Saturday week, January 19th, but, in the absence of major glitches, Hassan doesn’t expect the league trial to be aborted.

“The undertaking from November’s Central Council meeting was that the rules would remain in place for the provincial competitions and the league and that there would indeed be a review at the meeting on the 19th of January, but that would particularly relate to the area of unintended consequences.

“Inevitably, delegates will bring to bear the views of county managers, and they will be reflected, but I was quite struck by how responsible the delegates felt about the heritage of the game as well as its future and production, and so they will be conscious of those concerns as well.”

Having been involved in county management himself, Hassan has sympathy for team managers, for whom the imposition of a rules experiment is disruptive in preparing for the second most important competition of the year, the Allianz Football League, but it is also the competition designated as the appropriate arena in which to road-test any playing rule changes.

He believes, however, that whereas rules are only part of the solution to the problems football is currently experiencing, with falling crowds, falling television audiences and Dublin’s domination of the championship, the attractiveness of games is becoming an important issue for all sports.

“It raises the question of to what extent can changing the rules of a sport, in this case Gaelic football, act as a panacea for the concerns of people as to how the game is played. I think rule changes can make a contribution but in isolation, that’s all they will do.

“What we also do need to consider is the input of other stakeholders, referees and securing consistency of application, secondly how games, teams and individual players are coached and the third is what [GAA president] John Horan has been referring to – the issue of competitive balance.

“So, to place all of our expectations on rule changes would be a very simplistic approach. That’s point number one. The second point is that recent figures regarding the engagement of people with sport in Ireland indicate that last year 66 per cent – two-thirds of the people – consumed sport either on television, mostly, or through their phones or iPads etc.

“In other words these are non-attenders at games and the future of sport on available evidence is away from the stadium, and so the production of the games more broadly has to be a concern for sports organisations that depend on that revenue stream.”

Trial rules
1) Hand pass to be restricted to three in succession before ball must be kicked.
2) Side-line balls must be kicked forward except when in or on the opposition 20-metre line.
3) An attacking mark may be taken inside the opposition 45 provided kicked in play from within the opposition 45 and travelling at least 20 metres.
4) A black-card infraction to be punished by 10 minutes in a sin-bin rather than automatic substitution by a replacement.
5) Kick-out to be taken from 20-metre line and must travel to the 45-metre mark.

1 Tipperary and Cavan deliver two earthquakes in one day
2 Munster beat Glasgow to keep their winning streak going
3 Every kind of wind imaginable was against Tipperary football - and they came through
4 The Offload: Ireland are stuck in no man’s land
5 How a visit from his barber helped Kyle Sinckler get back to his best
Real news has value SUBSCRIBE