After decision to drop rule change, focus shifts to other ‘fundamental issues’ 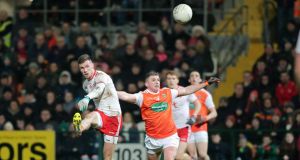 Armagh versus Tyrone in the McKenna Cup. Photograph: Philip McGowan/Inpho

Later in the afternoon Connacht Council announced that Sunday’s FBD league final between Roscommon and Galway, won by Roscommon, would dispense with the hand-pass trial.

On Saturday night the McKenna Cup final between Armagh and Tyrone was also switched back to the pre-trial rules. Tyrone won a seventh title in eight years before a big attendance of 11,318.

With the football league just a week away, it was probably predictable that counties would want to reacquaint themselves with the rules that will apply throughout the competition.

There were raised eyebrows at the narrow margin of the vote, 23-25 after a debate of about 1½ hours, during which most delegates spoke.

The other four experimental rules were accepted for continued trial:

Side-line balls must be kicked forwards, except when in or on the opposition 20m line.

A black-card infraction to be punished by 10 minutes in a sin bin rather than automatic substitution by a replacement.

Kick-out to be taken from 20m line.

Sports performance analyst Rob Carroll, whose research had underpinned the proposals advanced by the Standing Committee on the Playing Rules, chaired by Derry academic David Hassan, also conducted a review of the trial by analysing 10 matches from the pre-season schedules.

Among his findings, presented to Central Council, was that there had been 20 additional possessions per match but no overall effect on goal scoring (despite an appreciable drop in Ulster’s McKenna Cup). He also reported that the ratio of hand passes to kicks had dropped from 3.5:1 in the 2018 championship to 1.3:1 during January’s matches.

Opposition to the experiment was most marked among Ulster counties, who had expressed the greatest volume of misgivings during the McKenna Cup.

Hassan said that his committee would continue to work on suggestions for potential improvements in football.

“Ultimately it was a democratic decision, and I’ve no difficulties with that. We’ll go off now and look at other areas and come back because there are fundamental issues that must be addressed.”

The four remaining experimental rules will continue during the league, and if a review process approves, they will be brought to a special congress in the autumn. Proposals for a tiered football championship are also expected to go before that congress.

A number of ticket price increases were announced for the coming year. All-Ireland senior hurling and football finals will increase by €10 to €90 for stand tickets and by €5 for Hill 16 tickets to €45.

More immediately, headline prices for the national league will go up by a third from €15 to €20. Pre-purchases, previously available at €13, will be available for €15 as will concession tickets for students and senior citizens.

In divisions three and four in football, and divisions two and three in hurling, the admission prices will remain unchanged at €10 and €5. Under-16s will be admitted free to Allianz Leagues games – except where matches are all-ticket, where the price will be €5.

There will be a €5 increase for tickets to All-Ireland senior hurling and football semi-finals, up to €50 for the stands and €35 for the terraces. There are no changes in the prices of All-Ireland quarter-final tickets.

According to a GAA statement on the increases: “This represents the first major review of Championship ticket prices since 2011. Additional revenue from these changes will be ring-fenced to fund an increase in grants to club facility redevelopments to a new high of €3 million, fund additional grant aid to overseas units and the staging of the GAA World Games in July, and make increases in capital grants and funding to county boards.”