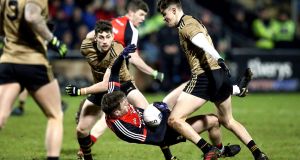 “Division One football at its best. The learning is incalculable for them, really,” said Éamonn Fitzmaurice after watching his young Kerry team, down to 13 starlets, repel a late siege on a full-blooded Saturday night in Castlebar.

The Finuge man has understatement down to an art form but he must be privately thrilled by this win. It wasn’t so much the fabulous first-half shooting display, with Barry John Keane spearheading an absolutely exuberant display from Kerry’s front line that Fitzmaurice chose to concentrate on, either. It was their conviction throughout that late storm, when Kerry had all the football played and then had to hold on for dear life.

Sometimes it’s okay to stir the hornets’ nest. Kerry were living dangerously from the moment Ronan Shanahan floored Mayo full-forward Evan Regan, who was through on goal with a heavy tackle that led to a yellow card and Regan being escorted from the field in the 45th minute. Be careful for what you wish for: his replacement was Cillian O’Connor.

The score was 1-10 to 2-05 in Kerry’s favour. Shanahan was gone on a second yellow before Kerry could substitute him; Gavin Crowley followed him just two minutes later. By then, the appearance of Colm Boyle and Andy Moran signalled that Mayo had had seen enough impudence from the Kerry youth and were ready to reclaim the night. Perhaps the most significant passage of play of the night was Paul Murphy’s exceptional point in the 48th minute, just when the tide seemed to be turning in Mayo’s favour.

The Rathmore man has been on fire this winter and led by example all night here. Two minutes later, Barry O’Sullivan fired a right-footed point to give the Kingdom a five-point lead, 1-14 to 2-06 with 20 left. It was the breathing space they needed. They added just one more point over the next 24 minutes, with the remaining 13 just holding what they had. It was enough.

“I think when our backs were against the wall, we were down to 13 men and the lads showed a lot of courage and know-how and played a kind of game we wouldn’t be that used to,” said Fitzmaurice with the air of a man who had just seen his young‘uns ride a bike without stabilisers for the first time.

“It was just a bit of courage. Indiscipline got us into a bit of bother but we showed good discipline in the last 10 minutes in particular to see it out.”

That viewpoint is open to interpretation: Mayo can justifiably argue that they forced Kerry into enough indiscipline to cough up a series of straightforward frees in that last quarter. But Cillian O’Connor couldn’t get the radar working and Jason Doherty missed a shot he’d expect to get as the home crowd urged a spectacle to equal the Parisian finale that many of the 11,056 present had just witnessed in the MacHale Park bar.

Colm Boyle found himself at the end of Mayo’s slickest passing move and his well-struck shot on goal in the 57th minute was lifted off the line by Shane Enright, who popped up all over the field. Mayo just couldn’t mount a proper charge. They were lucky to be in the contest until the end, having manufactured two goals from nothing in the first half, with Diarmuid O’Connor looping off a throw-ball won by Aidan O’Shea and then converting a penalty in the 35th minute. But Mayo were held to three points in the first period – and just one from play.

On home turf, that’s an insult. Kerry, in contrast sent 10 classy points fizzing over the bar, had a penalty saved, missed four frees and tackled like demons.

“We turned over the ball way to easily,” rued Stephen Rochford of that first half.

“The reality is we were a bit fortunate only to be a point behind and within a minute of the second half we put ourselves in a strong position. We didn’t drive on and conceded a goal from the next possession and it was disappointing.”

In truth, Mayo seemed a little surprised by the bite and impudence of Kerry’s up-starts. Crowley was a thorn in Aidan O’Shea’s side all evening and Kerry’s front line stretched the Kerry back division to breaking point – even if David Clifford lasted just 20 minutes before leaving with a hamstring strain.

Strangely, his marker, Ger Cafferkey, departed with a similar injury just three minutes later. Mayo just aren’t in the place where they particularly need or want to be dealing with Kerry’s next generation out to cause a bit of mayhem in early spring.

Old know-how might have seen them steal this game had their finishing been better but it would have been just that: theft. This was Kerry’s night. The fearlessness – and joy – with which their front six shot on sight bode well and the collective appetite for work and tackling was daunting. It’s true that Fitzmaurice is coping with a minor injury crisis but it’s also clear that he wants to give the younger crew as many minutes as possible.

“Even if everyone was available this is the road we want to go down in the league and we want to expose the lads to this kind of football so I think it is a very positive challenge for all of us. And the lads are enjoying it.”

You can bet that more than a few headed south with renewed belief after this.

It would be foolish to draw any conclusions about Mayo. They’re always green above the red but this team won’t show their true colours until July.