McGrath admits Waterford are not where they want to be 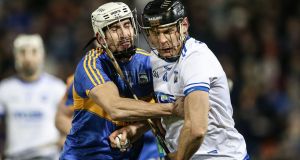 Waterford fell to a second defeat in a row in the Allianz League but manager Derek McGrath said they will continue to use the competition to try out players.

Hopes of them bouncing back after an opening weekend reversal to Wexford didn’t materialise as they faded against the wind as Tipperary outscored them by 1-11 to 1-1 in the second half.

Waterford are in danger of making an immediate return to Division 1B but McGrath said they were treating the league seriously.

“Our dressing room is the most motivated it has been in a long time, it’s not us having shoulders back and not giving a damn about the league. We want to represent Waterford but we’re not where we want to be yet, physically, because we were a little later going back,” said McGrath.

“For us, we wouldn’t feel our confidence would be shredded by not getting any points here tonight, we wouldn’t feel arrogant enough to treat the league in a flippant manner. But we hear a lot about player welfare, too.

“We have a 21-day period from May 27th to June 17th where we have four games in 21 days. We can’t find out whether we need Peter Hogan, DJ Foran, Ian Kenny for those games because I can’t see it being done. “Why are they on the panel then? Because they need game time, so it’s about mixing and matching through the league for us,” added McGrath, who could be without Austin Gleeson for their next outing against Kilkenny after the former hurler of the year picked up a quad injury.

Tipperary trailed by just 0-10 to 0-9 at the interval after Waterford squandered some good chances.

Both sides finished with 13 wides but a lot of the Waterford misses, particularly in the opening half, were from good positions.

But the win came with a price with Tipperary losing wing-forward Dan McCormack and wing-back Joe O’Dwyer in the opening 10 minutes.

“We’ll have to see how they are. Dan [McCormack] is worrying, any time you see a guy linked coming off the field. It is his knee, so we’ll have to see, that’ll take 24, 48 hours. We thought Joe O’Dwyer dislocated a finger but it looks a bit more sinister; it may be a broken thumb,” said Tipperary manager Michael Ryan.

And while Tipperary dominated the second half, they laid the foundation for the win by containing Waterford in the opening half.

“We were looking to get a start and when a quality team comes to town like Waterford, you have to perform.

“I thought we were sluggish in the first half, there was too much ball being brought out too easily by the Waterford backs, so I thought there was a considerable shift in the second half,” added Ryan.

Ronan Maher was of several outstanding performers for Tipperary with Jason Forde amassing 1-9.

He blasted home a penalty after 50 minutes to send Tipp on their way to victory after Mark O’Brien had levelled with a goal at the end of a good passing movement for Waterford.