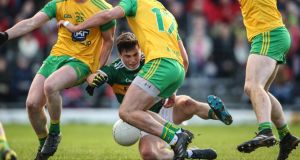 The league’s double life as simultaneously the most derided and enthusiastically embraced phenomenon in the GAA endures. All across the country, tumbledown old grounds rocked and rolled across a Sunday afternoon of what will ultimately prove to be fairly meaningless fare - not that anyone felt sheepish for their fervour afterwards. You wouldn’t have imagined it was summertime, but neither would you have guessed it was January.

In football, the game of the day was in Killarney, where Kerry squeaked a 2-18 to 3-14 win over Donegal. Despite all the much-ballyhooed youth on show on both sides, it was 27-year-old Daithí Casey who carried the day, landing the winning score in injury-time after a mazy solo run and sending Fitzgerald Stadium into raptures.

Casey, who first played senior for Kerry back in 2011, had presumed his inter-county career was over when let go by Eamonn Fitzmaurice after the 2015 league. But some doughty performances for Dr Crokes in last year’s Kerry championship brought him to the fore once again. This was only his eighth ever senior game for Kerry since that debut seven seasons ago but he made it count, scoring the winner after coming off the bench in the second half of a thunderously good game.

Elsewhere in Division One, Galway pulled off the result of the day, toppling Tyrone in Tuam on their first game back in the top division since 2011. An early Damien Comer goal set the tone for a game in which Galway never trailed and with Darren McCurry picking up a first-half red card for Tyrone, Kevin Walsh’s side were always able to keep the northerners at bay, eventually running out 1-9 to 0-8 winners.

In Clones, Mayo edged Monaghan by 0-13 to 0-12 in a game where the home side ended up with 12 men on the pitch. Ryan Wylie and Barry Kerry were sent off for Monaghan in injury-time. They also saw Dermot Malone exit on a black card and in the middle of the chaos, Patrick Durcan got up for Mayo to kick the winning score.

“You’d have to be satisfied,” said Stephen Rochford. “This is my third year in Division One and it’s the first time I’ve been involved in a win in the first game. We were certainly rusty and we found ourselves going a bit flat late on. Our fitness was lacking a little bit, obviously, and I feel we could have controlled things a little bit better there in the second half.”

Grandstand finish of the day was in Division Two. In Dr Hyde Park, Roscommon and Meath played out a 2-12 to 2-12 draw in which both sides won it, lost it and drew it over the course of the afternoon. Roscommon just about survived it thanks to an injury-time penalty for Donie Smith, having earlier thrown away a five-point lead. Meath forward Eamonn Wallace had missed a chance to put the game away as the clock ticked down when they were four ahead and Smith made them pay after referee Barry Cassidy awarded a penalty with the last act of the game.

In the other game in Division Two, Down beat Louth by 1-14 to 0-11. There were wins for Armagh, Fermanagh, Longford and Westmeath in Division Three and Antrim in Division Four. Finally on the football front, Waterford and Wicklow played out a 0-12 to 0-12 draw in Aughrim.

In hurling, Clare were always a step or two ahead of Tipperary in Ennis but needed an injury-time goal from David Reidy to put a gloss on the final score, handing them a 1-21 to 0-19 victory. With Shane O’Donnell leading the line and John Conlon and Tony Kelly busy around the middle, Clare managed to stay ahead of Mick Ryan’s Tipp side.

“We’re very happy with the actual performance and obviously the result to boot,” said Clare co-manager Donal Moloney. “We’ve placed a good bit of emphasis on getting off to a good start in the league. We were down in Páirc Uí Rinn this time last year and it wasn’t the best start. So today was really important for us and maybe in reality more important for us than for Tipperary - they were bringing on the likes of John McGrath and Brendan Maher so we were probably a bit more focussed on today than they were.

“We’re really happy with our guys because they had a five-point lead that was brought back to level, but they got themselves back ahead again and finished with a little bit extra in the last four or five minutes. That was great endeavour, great honesty. Good crowd here as well - the same as in Páirc Uí Chaoimh last night. People want to see more hurling games.”

In the other Division 1A game, two goals from David Dunne pushed Wexford to a 2-20 to 0-19 win over Waterford away in Walsh Park. And in Division 1B, there was very nearly a major upset when league and All-Ireland champions Galway were put to the pin of their collar by Antrim in Salthill, eventually needing to rattle off eight of the last 10 points to win by 1-19 to 1-16.

“I said earlier in the week, there’s a realisation of where we are and you saw it out there,” said Galway manager Micheál Donoghue. “We were fortunate to get away with the two points. We have a lot of work to do. Antrim were very good out there and they really put it up to us. It’s two points on the board and we’re relieved to get out of here because it was touch and go for a while.”