Dublin fill their boots against Tyrone 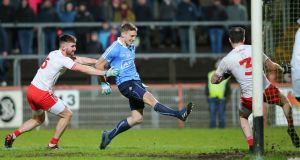 All-Ireland champions Dublin launched an impressively complete raid on Omagh on Saturday evening. They rode out a lightning start by Tyrone and being reduced to 14 men when Niall Scully picked up a second red card in the 46th minute and still cruised home to win by five.

Mickey Harte’s team didn’t help themselves with a freight container of wides - 13 as opposed to the winners’ two - and urgency eventually gave way to panic as Dublin pounced for a late goal by Eoghan O’Gara.

On a damp and wintery night in Healy Park, before 9,465 spectators, Tyrone got the chance to make amends for last August’s All-Ireland semi-final wipe-out and showed every intention of doing just that in the first half. The home side fielded eight of the team from the championship whereas Dublin played 11.

Reversing last summer’s painful precedent, it was the home side who struck for an early goal. Cathal McShane, who had kicked the first point of the match, broke forward onto Connor McAliskey’s quick hand-pass and buried the ball behind Stephen Cluxton.

At half-time, leading by two, they probably felt that they could have been doing better. Despite looking lively and causing trouble for the Dublin full backs through Lee Brennan and McAliskey, their overall accuracy was poor and they shot six wides.

Brennan went on to have an impressive evening, his movement and accuracy leading the way for Tyrone, but it wasn’t enough with so much malfunction elsewhere in attack.

The All-Ireland champions did what they usually do: refrained from panicking. Trailing by 1-1 to no score in a predictably claustrophobic match, they plugged away, picking up points here and there and striking for goal in the 22nd minute. Brian Fenton, who worked his way into the rhythm of things having found the sticky pitch a bit of a challenge early on, launched a free in on the Tyrone square.

Aidan McCrory was outfielded by Ciarán Kilkenny who fired the ball home to cut the deficit to a point, 1-3 to 1-4. It was an interesting turn by Kilkenny, who in his underage years was a full-forward line shooter before becoming the master of recycling and off-the-charts possession counts of more recent times and he kicked 1-2 in a productive evening.

Any home concerns that the interval lead might be insufficient weren’t long in being substantiated. In the opening minutes of the second half, Dean Rock’s free and points from the excellent James McCarthy, gliding up and down the pitch more or less at will, tied up the scores at 1-7 each.

Cluxton pulled down a high, dropping shot from Declan McClure to prevent Tyrone hitting the front and with that chance gone Dublin soon ensured that the Ulster champions would never lead again. Fenton, now in his stride, calmly put the visitors into the lead for the first time.

There was a possible way back for Tyrone after they had slid three behind. A spirited build-up from the kick-out saw them sweep down field and put McAliskey in on goal but Cluxton saved well to deflect the ball away to safety.

By now Tyrone were living the nightmare of watching shot after shot waved wide. Ironically when Niall Sludden eventually pinged a shot off the posts and over for a point, nearly 20 minutes after they had acquired a one-man advantage, the floodgates opened at the other end.

Replacement corner forward Colm Basquel brought added sharpness to Dublin’s game and he managed three points after coming on in the final quarter. With the lead at 2-12 to 1-8, the final curtain fell. Niall Morgan’s attempted 1-2 out of defence from a kick-out was intercepted by Basquel who laid on the scoring pass for O’Gara to bundle the ball home.

A disappointing night for Mickey Harte’s team but Dublin march on from one of their tougher looking fixtures and already look like they mean business. Again.