Kerry get their teenage kicks in Castlebar 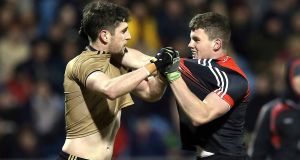 Sometimes it’s good to stir the hornets net. Kerry’s youngsters came to Castlebar, shot the lights out, bullied venerable Mayo names, had two men sent-off on yellow cards with a full 20 minutes left, almost combusted and finally won. What a result for the Kingdom. If the teenagers brought their ID’s, they’d deserve a night out on the tiles around Linenhall Street.

Mayo contributed to their demise by misfiring with a series of frees against a stretched Kerry defence and the night could have turned but for a vital intervention when Shane Enright came from nowhere to catch a Colm Boyle shot on the goal line in the 57th minute.

This was a jagged-edged match with something beyond February rancour at the heart of it. Kerry needed to stand up and be counted and weren’t found wanting. If Mayo have one genuine grievance, it’s that Aidan O’Shea was hauled and dragged into coughing up the possession which led to Kerry’s 37th minute goal.

But the big midfielder stood and raised his arms in protest while his marker, Gavin Crowley, stormed up-field and took a pass from Barry John Keane to land a terrific goal. It summed up Kerry’s attitude: positive, impudent and fearless. They deserved the spoils and it felt like a match that was worth a month of training to them. 11,639 showed up: most of them were packed into the MacHale Park bar to watch Jonny Sexton’s drop goal before racing across to the stadium for what was a gripping league match.

Kerry pulverised Mayo everywhere except the scoreboard in the first half. They looked ravenous for work all over the field and once in position they were brilliantly businesslike in getting the ball into a scintillating full forward line of David Clifford, Paul Geaney and Barry John Keane. Clifford clipped a point and created a goal chance before hobbling off after just 20 minutes, hopefully not a harbinger of the demands being placed on his young frame.

But the Kingdom front line was buzzing with adventure and confidence: five of the six starters had delivered quick, clean points from play in the first half and Keane was a model of efficiency. The Kerins man is one of the more intriguing characters of the present set-up; practically a veteran in comparison to some of the new faces and maybe ready to move on from enigmatic role actor to leading man this season.

They fired 0-10 from play in the first half. In addition, Sean O’Shea had a penalty brilliantly saved by David Clarke, they turned four good scoring chances wide and dropped a ball short. They could have been out of sight. And they weren’t resting on their laurels either, aggressively closing down the short options for Clarke’s restarts.

At the other end of the field, Enright set the tone for an uncompromisingly tight defensive effort: the fear of getting turned which had stalked Kerry’s defence in recent years didn’t exist here. Yes, it’s early February; the night hazy and the ground soft but the Kerry defenders backed themselves one-on-one. The result was just a single point from play, from midfielder Barry Moran. And they didn’t flinch in the face of up-front tackling from Mayo’s forwards. The exchanges were tough and often and you can bet it warmed Eamonn Fitzmaurice’s heart to see the youngsters standing up to this.

But what a head-scratcher for them to find themselves just a point up at the break! They paid for two lapses: Aidan O’Shea won a throw-ball on the edge of the D and found Diarmuid O’Connor looping around the ball-watching defence. His finish, in the 13th minute, was clean and low.

And Mayo needed that goal: they were still stuck on 1-2 in the 34th minute and looked all at sea. Then a big, piercing run up the middle by Paddy Durcan sent Neil Douglas through and the Mitchels man was dragged down. O’Connor stepped up to revive hopes from the penalty spot and Jason Doherty added a well-struck free to leave themselves perfectly placed on the board despite being bossed in so many sectors.

But the second half rally never quite materialised for Mayo despite the appearance of the Howitzers - Boyle, Moran and O’Connor. Kerry held off for a big win that will stand to them in the summer and Kingdom rang out when referee Derek O’Mahoney blew it up in the 74th minute. It’s never dull between these two.