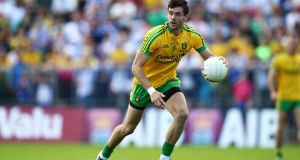 DIVISION ONE
Tyrone v Dublin
Omagh, 7.0
Last summer’s crushing performance by Dublin was a stark departure from the claustrophobic league encounters between these two. This is Jim Gavin’s first visit to Tyrone since 2014. That 1-15 to 3-10 win set the tone for a series of riveting league cat-and-mouse affairs. The Ulster champions are on the back foot slightly after an underwhelming show against Galway. The All-Ireland champions can expect fire and fury and will look to lay an early marker with a road win.

Mayo v Kerry
Castlebar, 7.0
Build it and they will come. Not even the lure of a fireside Six Nations afternoon will halt the usual droves of Mayo fans who show up year in year out for these occasions. Last year’s championship encounter between the two was pure drama. Éamonn Fitzmaurice looks happy to test the theory that you can’t win anything with kids, but the visitors may struggle for physique if Mayo roll out a few of their eternal boys of summer.

DIVISION TWO
Cavan v Louth
Breffni Park, 7.0
A late free by Bryan McGee dug the Cavan men out of a hole to salvage an important draw in Ennis against Clare. Tonight’s home match presents them with an important chance to gain momentum against a Louth team still adjusting to life in Division Two with new manager Pete McGrath.

DIVISION ONE
Kildare v Monaghan
Newbridge
The Lilywhites looked a little naive against Dublin a week ago but will have learned a lot. Daniel Flynn was at the forefront of an athletic effort and, for 35 minutes, they matched Dublin. It is something to build on. Conor McManus’s return can’t come quickly enough for Monaghan, but they don’t know how not to compete for everything going. Draw.

Donegal v Galway
Letterkenny, 2.30
A very useful opening-day win for Galway puts them in good stead for this intriguing match against Declan Bonner’s free-scoring Donegal team. Kevin Walsh has added Paddy Tally to his management squad to tighten the defensive bolts, and the front-of-house looks exciting. The newly returned Odhrán MacNiallais caught the eye in Kerry but Leo McLoone, hugely influential in the Jim McGuinness era, is also back in the heart of defence. Unpredictable game but Donegal need to reverse a shocking record at this ground.

DIVISION TWO
Down v Cork
Páirc Eisler, 1.30
This is not an ideal assignment for Ronan McCarthy’s Cork team straight after their disappointing opening outing against Tipperary. With Cork hotly tipped to shoot up to division one, this match suddenly becomes a must-win. The loss of Seán Powter, their find of last year, for the rest of the league, is a bad blow for player and county. Ryan Johnson is expected to feature for Down. Closing down Connaire Harrison is a must for Cork but this looks a tough assignment.

Tipperary v Roscommon
Semple Stadium
Tipp’s 3-8 second-half blitz on Cork last weekend was a notice of intent and intensifies the jostling for places. Liam Kearns has done exceptional work with this group. Roscommon needed a late penalty to earn a home draw a week ago and need to display their promotion credentials here. Conor Devaney and Diarmuid Murtagh will be available to the visitors despite concern over injuries.

Meath v Clare
Páirc Tailteann
An almost-magical start for Andy McEntee’s team reverts to the basic requirement of a home win here. Meath registered 1-5 from the bench, including a goal by Eamonn Wallace in almost toppling Roscommon. Clare will feel they blew a promising position last week and will be nobody’s pushover, but Meath have to win this if they want to make a promotion push.

Sligo v Wexford
Markievicz Park
Two teams very hungry for a win. Tough for Wexford footballers as they operate in the midst of the hurling revolution and could struggle here against Cathal Corey’s young team.

Longford v Derry
Pearse Park
Benny Heron, Carlos McWilliams and Terence O’Brien return to deepen a Derry side seeking to get their season off the ground. They face a tough task against a Monaghan team who have started brightly.

Westmeath v Armagh
Cusack Park, 2.30
Respective managers Colin Kelly and Kieran McGeeney have emphasised that they won’t be getting away by opening day wins. Privately, both will target this one. Armagh to edge it.

Colin Kaepernick’s exile is too fresh for NFL to speak out on US protests 07:00
1913: The year the GAA really started to get its house in order 06:00
Ken Early: Champions League has stolen international football’s clothes 06:00
‘A radical departure’: Who are CVC and what are their aims with rugby? 06:00
The strangest fishing club in the US and the huge pike that bit a schoolboy 00:00
Crossword Get access to over 6,000 interactive crosswords