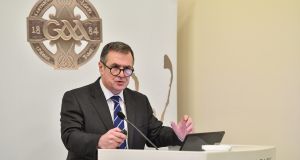 Croke Park stadium director Peter McKenna has criticised the “opportunism” of Dublin hotels and its impact on conference business in the city.

“It’s 15 per cent of our business so it’s probably not as large as others. It will resolve itself because the market is introducing new hotels to the city but in the short term you do get this opportunism,” he said.

Asked what constituted the short term, he said: “I think it’s two to three years.”

McKenna said that he was aware of the problem because of feedback from the conference business in Croke Park.

“Absolutely. People are saying, ‘We’re trying to book in and one of our costs is hotel rooms and that is such a variable it’s so hard for us to plan.’ We can settle on our daily delegate rate here very quickly but that’s only one part of the cost. Air fare is very stable; it’s just hotel prices fluctuate way too wildly.”

He said that he hadn’t made direct representations to the Irish Hotels’ Federation. “No, but we do make our messages known through Fáilte Ireland and various others.”

From this year on, the All-Ireland finals are being moved to August and McKenna accepted that this would increase demand at an already busy time of year.

“It does, although this year the football will be in September because of the papal visit but August is a busy time. The sooner there’s a greater number of hotels – I mean if there wasn’t Airbnb, the place would come to a stop.”

He was also able to announce that the grant from Croke Park to Central Council had been maintained at last year’s level, €7.5m – bringing to €99m the total disbursement since the transfers began in 2006.

Attendance figures at the GAA Museum in the stadium continue to rise and 156,000 visited in 2017, ensuring it held its place in TripAdvisor’s top 10 attractions in Dublin.

With his commercial director’s hat on, McKenna said the increased fixture list for this year wouldn’t have a major impact on broadcast schedules.

“I think it’ll be the same as. What you’ll probably see this year because of having the facility to have live games on RTÉ, on back-to-back channels, we’ll probably look at running some of them on GAAGO [the association’s streaming service run in partnership with RTÉ] so we’ll be able to stream games for the first time, on our own service. That’ll be a new development we’re working on. I think the new championship format is going to be very, very positive.”

Agreement with the GAA’s broadcast partners hasn’t, however, been reached yet.