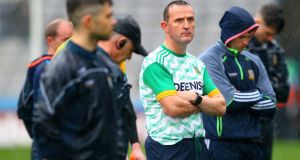 An investigation has been opened after Meath manager Andy McEntee was allegedly involved in an incident with a local reporter following his side’s loss to Dublin in the Leinster final on Sunday. Photo: Ken Sutton/Inpho

An investigation has been opened by the Meath County Board after senior football manager Andy McEntee allegedly told a local reporter “I’ll take the f**king head off you if I see you near the f**king dressing room again,” following Meath’s Leinster final loss to Dublin on Sunday.

On Tuesday, The Meath Chronicle called for an apology from McEntee after his altercation with reporter Jimmy Geoghegan following a question about whether the manager would release Meath players to play in the local hurling championship this weekend.

“Are you f**king mad? What sort of f**king question is that to ask me?” McEntee said to the reporter after the question had been asked and then later told him “I’ll take the f**king head off you if I see you near the f**king dressing room again,” when he saw Geoghegan and three other journalists interviewing Ben Brennan and Graham Reilly near the team bus.

In a statement released to The Irish Times on Wednesday, a spokesperson for the Meath County Board said “Meath GAA are aware of the incident involving the Meath Senior Football Manager and a reporter from the Meath Chronicle.

“Meath GAA are investigating this incident and no further comment will be made regarding this issue at this time.”

Speaking to The Meath Chronicle, Geoghegan said that “it was the second confrontation that really shocked me. He accused me of asking him a ‘leading question’ but it was never meant to be that.”

As of Wednesday the Chronicle had still not heard back from Meath officials. The newspaper’s editor told The Irish Times that they won’t be making any further comment as it is now in the hands of Meath GAA and McEntee to respond.