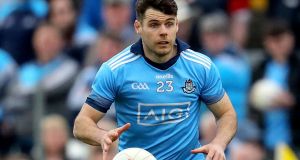 Dublin’s Kevin McManamon: “I don’t know where it came from, saying that people are getting six grand to go and give medals out? Like, that’s not true, that’s just not true.” Photograph: Bryan Keane/Inpho

Kevin McManamon attempts to sum up his career with Dublin and his various successes, but can’t quite find the right words. “My success has been for free, if that makes sense,” he said.

Playing for Dublin, he explained, has always been about his heart overruling his head. Money, and even sense and logic at times, have never been guiding principles. It’s why he and a pal at St Jude’s set up a fresh food company at one stage to allow McManamon to work irregular hours and devote more time to football.

“It was just so I could play football really, I didn’t really enjoy the job that much,” explained the six-time All-Ireland winner.

The argument that continues to rage about Dublin footballers enjoying a moneyed existence and an unfair advantage over their rivals doesn’t sit easily with McManamon.

“Yeah, and it comes out the odd time and people say it’s all about money, and you’re kind of just used to it at this stage. Some people are trying to use it as bait to wind us up. You just kind of smile at it.

“Anyone in my career that’s supported me or that’s helped me become the player I am doesn’t get paid. That’s how I would look at it. At Jude’s, it’s great to see, you go up the odd time to the academy and there’s hundreds of young lads playing, and they’re all volunteers that are giving their time to train them and give them a good Saturday morning, to make them enjoy football and hurling.”

McManamon’s take will not appease those who argue that the GAA has created a monster by investing so much in Dublin to the detriment of their neighbours and rivals.

The figure of almost €18 million that has been pumped into Dublin in games development and coaching grants between 2007 and 2018 – Cork is next on €1.4 million in that period – has been consistently highlighted.

The end result, it is claimed, is Dublin’s 14 Leinster title successes in the last 15 seasons. Under Jim Gavin they have won 21 out of 21 provincial games with a staggering 346 points to spare. Meath felt their full force just last Sunday, losing the Leinster final by 1-17 to 0-4.

“I don’t know, I don’t know the [financial] figures. I don’t know anything about it,” said McManamon. “I’d leave that up to John Costello and the lads in the county board, but does it affect us? It’s hard to know. Obviously if you say those figures it makes it sound like it does. I don’t feel it or experience it.”

McManamon’s sense is that Dublin’s success is cyclical, and that they are in the middle of a boom time.

“I remember years when we couldn’t buy a Leinster title. Look, we’ve got a lot of seriously talented players that don’t come along every day. Time will tell. Obviously we’ve been dominant the last number of years. I think it is [cyclical].”

It was reported earlier this month that Dublin players like McManamon can earn up to €6,000 for a single promotional appearance as multi All-Ireland winners. Again McManamon said the figures touted do not tally with his experience.

“I don’t know where they came up with those figures because I’ve never seen anything like that, to be honest with you. I don’t know where it came from, saying that people are getting six grand to go and give medals out? Like, that’s not true, that’s just not true.”

What’s certain is that Dublin players are viewed as attractive promotional tools, and companies are prepared to pay for their services.

“If people are giving up their time, and if they’re training as much as they are and they’re going out and doing a sponsorship thing, all well and good, they get a few bob, but I haven’t personally seen figures like that.”

The 32-year-old is coming towards the end of a storied career that has yielded 53 Championship appearances, 32 of those as a substitute. He has scored 8-44 in that period, 5-16 of that coming on as a sub, with his goals against Kerry in 2011 and 2013 etched in history.

He is sure to go down as the GAA’s most famous super-sub with just two starts in the Championship – against Carlow in 2017 and Roscommon in 2018 – since being an ever-present throughout the summer of 2016.