Mayo's Diarmuid O’Connor reportedly out for the season 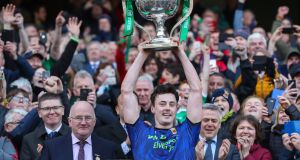 Mayo’s Diarmuid O’Connor is expected to miss the rest of the season with a wrist injury. Photo: Ryan Byrne/Inpho

Mayo captain Diarmuid O’Connor could miss the rest of the All-Ireland senior football championship after he suffered a wrist injury in training on Tuesday night, according to reports in the Mayo News.

Mayo face Armagh in round three of the qualifiers in Castlebar this Saturday and the injury to O’Connor is the latest blow with Matthew Ruane also expected to miss the rest of the season after breaking his collarbone while Tom Parsons and Seamie O’Shea are still working their way back to full fitness.

According to reports, O’Connor will undergo surgery on his wrist this week but the prospects of him playing again are not looking likely.

However, older brother Cillian O’Connor as well as Donal Vaughan are expected to make their returns in the near future.

Meanwhile, Dublin’s quest for five All-Ireland titles in a row received a boost on Tuesday night when it was revealed that James McCarthy has not suffered long-term damage to his knee after he came off the pitch injured during the Leinster final win over Meath on Sunday.

1 Limerick roar from behind to sink Tipp and start league in style
2 Six Nations: Ireland are contenders but England still the team to beat
3 GAA officials and referees brace themselves as new rules kick in, and this time it's for real
4 Mike Catt hopes to have Irish backs purring in Six Nations
5 The world spins but it’s soon back to Dublin and Kerry
Real news has value SUBSCRIBE