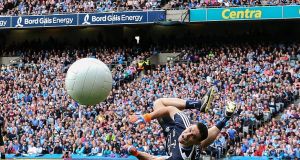 So much for a semi-final being a good place to catch Dublin. This wasn’t exactly the ritual disembowelling that Tyrone got last year but Galway will feel no less hollow for it. A late goal from Shane Walsh kept them within double figures in the final reckoning but there wasn’t much else they could take away from the experience.

A game that was nominally tight at half-time, with Dublin only a couple of points ahead, turned into the usual cakewalk after the break. Jim Gavin’s side ran in 15 points in the second period, hit the post, hit the crossbar and had a certain goal cleared off the line. They quickly disabused Galway of any notion that there was a place in the final available to them - Kevin Walsh’s side managed just two shots in the 15 minutes after the break. Dublin eased away from them at will.

In truth, it was laboured at times from Dublin before that. You always had the sense that they had the whip hand, they just weren’t windmilling away with it. Had their passing into the full-forward line been cleaner, they would have shaken Galway off quicker. But some unusually errant deliveries meant they got gummed up in the works and stopped them putting clear water between them and the Connacht champions.

What they weren’t lacking - and what they never lack - was efficiency in front of goal. In the first half alone, they put up 10 scores from 12 chances. Time and again they turned down half chances to allow themselves time and space to develop full ones. Ciarán Kilkenny, Brian Howard, Paul Mannion, Brian Fenton and Dean Rock all worked themselves into positions where you’d score yourself. The genius was the work that went into the scores, rather than the scores themselves.

And they’d have been away and gone only for the fact that Galway were having plenty of joy at the other end. Damien Comer was continuing his league final wrecking-ball act at full-forward, revelling in his height and weight advantage over Philly McMahon. After a quick Dublin start left Galway 0-3 to 0-0 down early, Comer exploded into the game with a punched goal on eight minutes.

After swapped points by Brian Howard and Shane Walsh, Comer doubled down, skittling through tackles from Cian O’Sullivan and Jonny Cooper on the edge of the square, with Cooper ultimately fouling him for a penalty. Here, now, was Galway’s chance. A second goal would have catapulted them into the lead and rattled Dublin to their ones.

Sadly for Galway, Eamonn Brannigan hit a WB Yeats penalty, lacking all conviction. He opened his body, telegraphing his shot low to Stephen Cluxton’s left and the Dublin goalkeeper ate it up, palming it round the posts for a 45. When Walsh missed the subsequent placed ball and Kilkenny stuck a regulation straight from the kick-out, it meant that Dublin had pushed into a 0-5 to 1-1 lead. It was as close as Galway would be to them for the rest of the day.

It was a crushing turnaround for Galway but that’s the way of it in these games. Dublin don’t want to hear your sob story. They’re just motoring on, regardless of what you have to say for yourself. That penalty miss came in the 12th minute - for the next 15, Dublin outscored Galway by 1-2 to 0-3.

Con O’Callaghan palmed in their goal after brilliant work by Jack McCaffrey to put Niall Scully away down the right. Fenton was at his imperious best, Kilkenny was Kilkenny to the max.

To Galway’s credit, when they got Ian Burke into the game, they found little pockets of joy. Having been on the margins for most of the first 20 minutes, Burke drew a couple of frees and lofted a point to keep Galway ticking over. Shane Walsh had the beating of John Small when he could get a head of steam up and he swished a point, Johnny Heaney latched onto a Burke pass to nail one of his own.

It meant a half-time score of 1-9 to 1-7, a state of affairs with which Galway would undoubtedly have been delighted beforehand. But it was of such little use to them, as Dublin tightened the bolts and squeezed the margins after the break. Mannion, O’Callaghan and Kilkenny added killer points, each of them after a long, protracted build-up over and back the pitch. The game was ebbing, ebbing and there wasn’t a whole lot Galway could do about it.

They’re just so much further back the road than Dublin - and they’re not alone, obviously. Gavin’s team just waited this one out, watched Galway fade in front of their eyes as they grew frustrated with the incessant chasing and harrying and took their scores when they were there for them.

Cormac Costello came off the bench to lay on a point for Rock before pinging a couple of his own and both Kevin McManamon and Paul Flynn sent over reminders ahead of the final. Long before the end, this was a massacre.

The four-in-a-row is theirs for the taking.