Dublin eye up history as Galway try to forget the past 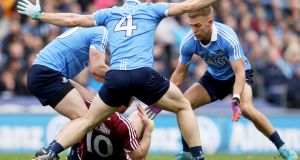 Strangely, the counties haven’t met in championship for 35 years – almost exactly the lifespan of the Eighth Amendment, which was passed a couple of weeks before the 1983 All-Ireland final and repealed less than three months ago. Even in an era of qualifiers and expanded championship schedules, it’s 84 years since Galway won.

Galway must consider it equally strange that, having had an excellent year to date (league finalists and Connacht champions followed by a first win over Kerry in 53 championships), just one below-par defeat in what was for them a dead rubber has been widely interpreted as marking the end of their ambitions for the year.

So from being Dublin’s chief prospective rivals at one stage, Kevin Walsh’s team have become simply a stepping-stone to the final, which appears to be an extreme reaction.

A crowd of around 65,000 is expected in Croke Park on Saturday evening to see which version of the Connacht champions arrives to take on opponents who are moving into the final phase of their campaign for a record-equalling All-Ireland four-in-a-row.

Galway have had a testing season to date and have beaten both Mayo and Kerry, All-Ireland semi-finalists – at least – for the past five years. Both matches required them to peak whereas Dublin have had only one serious eyeballing, up in Omagh against Tyrone.

At issue for Galway is the abjectness of the performance against Monaghan. All sorts of explanations have been offered, from the disparity in the teams’ levels of urgency, with the home team already qualified and the visitors needing a result, to lack of focus on Galway’s part – evidenced by sightings at the races.

Whatever the reason, they gave a really poor account of themselves and now make history by becoming the first All-Ireland semi-finalist to take the field after losing their most recent match. On the face of it, the depressed expectations are inevitable.

Dublin have been steadily progressing towards the All-Ireland rather than blazing a trail. Last week’s bean-feast at Roscommon’s expense for effectively their second string didn’t tell us a lot beyond intensifying the feeling that Cormac Costello should be starting, and illustrating the panel depth at Jim Gavin’s disposal.

The teams were well enough matched in April’s league final, and Galway created a platform for victory but didn’t avail of it

The champions have changed from the swashbuckling outfit of a couple of years ago to a more controlled and controlling collective with an emphasis on playing possession. The win against Tyrone was valuable because it was on the road and against a contender, but the winning total of 1-14 was Dublin’s lowest in a quarter-final match in six years.

Surprisingly they registered only four wides (plus three shots dropped short) so the tactic of holding possession while probing for openings was combined with a good conversion rate. It simply means that there were fewer attempts at scoring.

The teams were well enough matched in April’s league final, and Galway created a platform for victory, especially with Dublin reduced to 14 for the last 20 minutes, but didn’t avail of it, and a customarily strong finish by the champions saw them to a four-point victory.

There is, however, an argument that Galway hit peak form at that time. The win over Mayo was functional, if also vital, whereas the historic defeat of Kerry has to be placed in the context of the latter’s failure to get out of the group.

Damien Comer, who gave Dublin a hard time in the league final with an exuberant display at full forward, hasn’t been in that form during the summer, and Paul Conroy’s season has been ended by injury. More encouragingly on the injury front, there is optimism that both Seán Kelly and Michael Daly will be available.

Galway also have reintroduced Ian Burke since the league final and he has been a key performer, if afflicted by the general malaise in Salthill.

They will need to rediscover the template of the league final, keeping it tight in the early stages, and matching Dublin on the scoreboard. They could try Comer farther out on the 40 to prevent his becoming isolated inside.

Their problems include how comfortable Dublin are in those tight, low-scoring matches and how strong they will be around the middle of the field where Brian Fenton, Brian Howard, James McCarthy and Ciarán Kilkenny – when not in reverse gear, heading towards his own goal – have been sharp and threatening.

In the last two years Galway have ended their championship with really bad defeats at Croke Park. They can do better than that this time but they would need to do an awful lot more.