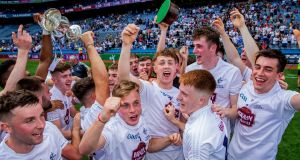 A penny for Cian O’Neill’s thoughts after witnessing Jimmy Hyland light up Croke Park with the one of the great championship displays by a Kildare forward.

Back in spring Hyland made five senior appearances for O’Neill’s Kildare, including a start against Galway in the Allianz league, before being released to focus on the inaugural All-Ireland U-20 football championship.

That decision worked out well for U-20 manager Davy Burke because the corner forward from Ballyteague hit a brilliant 10 points in the decider, eight of those from play, to see off Mayo in a thriller.

It brought to 2-16 his takings in Kildare’s last three games; wins over Dublin, a highly fancied Kerry and now Mayo.

What difference could Hyland have made against, say, Monaghan or Galway in the Super 8s games they lost narrowly? Perhaps not much and maybe it was the right decision to leave the rising star to concentrate on capturing a priceless title for the county. Allied to their appearances in four Leinster minor finals since 2013, the conveyor belt of talent is clearly chugging along nicely in Kildare.

They laid the platform for this win with a brilliant opening 20 minutes when they hit 1-9, including a Brian McLoughlin goal, and moved seven points clear of a stunning Mayo, registering just one wide in that period.

Mayo, to their credit, fought all the way as they chased a historic win and reduced a six-point deficit with seven minutes remaining to just two in injury time. But they lost midfielder Jordan Flynn to a straight red card in the 60th minute, and he could be in real bother now after shoving referee Niall Cullen.

Aaron Masterson had a huge game for Kildare at midfield, and lofted over their opening score after just 23 minutes in a thrill-a-minute encounter. There were 24 scores registered in the first 30 minutes alone, two of those goals, as two attack-minded sides went at it.

Kildare led at that stage, and hit the interval with a 1-13 to 1-9 advantage, though they felt they should have been further clear. They dominated Mayo at times in the opening half, and roared 1-9 to 0-5 clear after that 20-minute purple patch.

Yet Mayo were much improved too, and grabbed a 23rd minute goal through captain Ryan O’Donoghue when he took on the responsibility and strode clear for a wonderful solo goal.

Kildare ultimately finished the job with a blistering run of scoring between the 37th and 46th minutes when they hit four points without reply, all from Hyland.