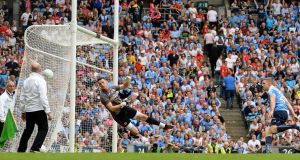 Tyrone goalkeeper Niall Morgan is beaten by Eoghan O’Gara for Dublin’s second goal in the All-Ireland semi-Final at Croke Park in Dublin. Photograph by Piaras Ó Mídheach/Sportsfile via Getty Images

An early hiss ran through the capacity crowd in Croke Park as the air was let out of all the high hopes for a high-pressure contest. Tyrone, purveyors of the finest defensive systems, having arrived in the All-Ireland semi-finals with plans laid and engines running to take down champions Dublin, spluttered to an early halt and never got going again.

Dublin defended with an unwavering focus, surrounding attackers and harassing them into losing possession or shooting hastily. It was late in the day when Tyrone tried something else, sending Colm Cavanagh in on the square where a couple of high balls discomfited the full-back line.

In injury-time Cavanagh was fouled by Philip McMahon and referee David Coldrick gave a penalty but Harte’s unconvincing attempt was well by Cluxton. Harte was claustrophobically marked by John Small for the first three quarters until the latter was substituted and double All Star Matthew Donnelly had a miserably unproductive afternoon.

Dublin dictated everything about the match and the outcome was virtually never in question. It will be different in the final. Mayo have always been able to cope with the champions physically and given the tiny differentials of their recent shared history, are unlikely to be inhibited by the prospect.

In the opening minutes both teams found space and encouragingly for the Ulster champions, Colm Cavanagh – main cog in the defensive wheel – blocked Ciarán Kilkenny’s shot and Tyrone must have felt everything was in place. Within seconds they led, as Seán Cavanagh kicked a free at the other end.

Another few seconds and the lead disappeared, never to return, when Dean Rock kicked a free after James McCarthy had been fouled to bring Dublin’s first incisive run to an unruly halt.

Two minutes later and it was all over. Niall Sludden, probably the only Tyrone forward to make any impact, had the misfortune to turn over the ball, Kilkenny passed to Con O’Callaghan who dropped his shoulder, took on the defence – right through the nerve-centre of the system – before unleashing a right-foot shot to the net.

The Cuala forward, in his rookie season as a starter, gave another encouraging display, shooting 1-2 and staking a claim for the Man of the Match award.

The indignity of being taken for a goal like that gave way to more practical concerns for Tyrone: how does a team so orientated to absorb and hit on the counter get the scores to make a success of chasing a match?

Welcome to the fifth minute; just another 65 to go.

Dublin’s grip on this match was total. The final possession count was nearly two to one – 63:37. They played keep-ball to take the energy out Tyrone at certain stages and at other times to stretch the defence to either wing, backwards and forwards, before striking with a shimmy or quick pass to release a player into space, frequently one who could score.

Tyrone’s success has come from defending deep, forcing turnovers and the speed of their counter-attack. Their inexhaustible pressing had yielded big scores but they were unable to get any sort of a grip on a Dublin team whose performance levels had gone up a few notches since the quarter-final.

Their skill on and off the ball was noticeable in the accuracy of the point taking and the tackling of in particular the forwards. Paul Mannion was to be found in his own defence on three occasions making vital interventions to steal possession from the opposition.

Dublin controlled the ball and created chances, which they overwhelmingly took – just two wides throughout the match plus another five attempts dropped short. This was especially valuable in the opening quarter when they built on the goal. Paddy Andrews let off two quick points followed by Kilkenny.

There could have been more goals as well. Jack McCaffrey, excellent at injecting pace into Dublin’s movements all afternoon, was put through on goal in the 52nd minute by Brian Fenton, who is hitting top form at the right time as the team’s orchestrator, only to blaze his shot wide.

Earlier replacement Kevin McManamon had rapped a shot off the crossbar having powered through the defence. At the end Niall Morgan saved from another replacement Paul Flynn, who should probably have made better use of the support players but he was able to benefit when possession was reclaimed and fired over his third point in injury-time to conclude the match.

Tyrone tried to change things in the second half by pushing up in pursuit of scores. They actually turned over Stephen Cluxton’s first two kick-outs on the resumption but their accuracy wasn’t good enough and after a simple, 20-metre free by Peter Harte had opened their account after the break they conceded two points in reply after O’Callaghan placed Paul Mannion for a point and in the 42nd minute, playing their opponents at their own game, a quick break saw McCaffrey speed into a gap and kick a point.

Dublin began to run the bench and Eoghan O’Gara came in to give a different option in the full forward line. In what was a productive 10 minutes or so at the end he scored 1-1, the goal after another sub Darren Daly had unselfishly teed him up to punch the ball into the net on the 70th minute.

Diarmuid Connolly made the much anticipated return from three months of suspension to great approval but didn’t touch the ball in his few minutes on and looked disgruntled going off. That would have been a minority sentiment in Dublin.