GAA weekend that was: Kerry fullback line in trouble all day

Mayo knew the weakness and targeted it, perhaps Aidan O’Shea could exploit further? 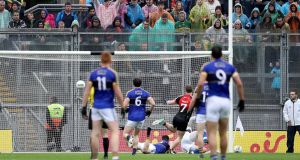 Numbers can, of course, be a little misleading. By the stats, Mayo had four more goal chances than the two they took. But for one of them, it’s fair to say a goal never really crossed Tom Parsons’ mind as he fastened onto Andy Moran’s quick free. And as for the other three, they were really just one chance in three parts, with Cillian O’Connor and Moran contriving to butcher the goalmouth scramble when Mayo were already a goal up in the first half.

Still, you didn’t need to know every last decimal point to know that Kerry’s full-back line was in trouble all day. Mayo knew it and they targeted it. It was obvious in the way Moran played far more centrally than usual that he and the management felt there was more on offer for him in front of goal than shuttling out to the wings to recycle ball all afternoon as he has in the past.

His goal came from a high ball pumped in on top of Cillian O’Connor and when nobody in the Kerry defence put a name on it, Moran was away. For sure, the bounce of the ball went Moran’s way. On a dry day, Cillian O’Connor would most likely have caught his brother Diarmuid’s ball in and either popped a point or taken a foul for a handy free. The goal was a heavy price to pay in the circumstances.

But watching the play develop again, Kerry will have worries on a few different fronts. For starters, Tadhg Morley stood way too far off Diarmuid O’Connor as the young Mayo wing-forward collected possession in midfield and started loping goalwards. Morley is usually such a sticky marker - the job he did on Ciarán Kilkenny in the league final marked him out as a seriously combative option in the middle of the Kerry defence.

Eamonn Fitzmaurice may well change personnel for Saturday, albeit that his options aren’t exactly bountiful in defence

But here, O’Connor had room and time to collect a 50-yard kick pass out of defence that bounced twice - skidding ball and all - and then to turn and advance down the sideline, take two solos and a hop as he cut inside and played a crossfield pass that landed on the 21-metre line straight in front of the posts.

Even if nothing had come off it, Mayo had moved the ball from David Clarke to the prime scoring area in two kick-passes and without a single Kerry finger being laid on them. In those circumstances and on a wet day, the odds are stacked against any full-back line. Killian Young was a half-step behind Cillian O’Connor for the ball in, a trend that continued for him and Shane Enright for much of the afternoon. But they got very little help from out the field.

Of course, the x-factor in it all is what Mayo will decide to do next

Eamonn Fitzmaurice may well change personnel for Saturday, albeit that his options aren’t exactly bountiful in defence. Fionn Fitzgerald and young Tom O’Sullivan were the designated defenders on the bench yesterday, while Ronan Shanahan and Brian Ó Beaglaoich are officially listed as additional members of the panel - as opposed to being injured. For either of them to be included on Saturday would require a leap, from them and Fitzmaurice.

You would suspect, however, that the Kerry management might be more inclined to stick with experience and instead insist on both a greater and smarter level of work-rate out the pitch. Plumping for a designated sweeper might be going a little too far for their tastes - more likely is trying to get Donnchadh Walsh back fit and installing Jack Barry from the start.

Mayo were able to move the ball too easily up the pitch because too many of the Kerry players were standing off their men. Fix that and Kerry’s full-back line ought to have a far more enjoyable day on Saturday.

Of course, the x-factor in it all is what Mayo will decide to do next. By now, we should be expecting a rabbit out of the hat beforehand instead of swooning in shock when it happens.

Aidan O’Shea to full-forward, anyone?