Dublin have the equipment to rage against the machine 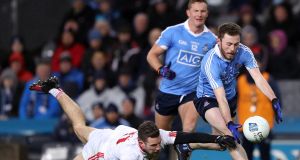 We can probably assume that Dublin manager Jim Gavin isn’t given to flights of superstition and that he wouldn’t have the late Páidí Ó Sé’s almanac of piseogs that needed to be addressed in the week leading up to a big match. But, still...

This weekend, just like that fateful one in 2014 when he sustained his only championship defeat, Dublin are in an All-Ireland semi-final the day after a Kerry-Mayo replay and facing Ulster champions, who although unfancied by the bookmakers bring an intricate and practised defensive plan to Croke Park.

The history between the counties in the past five seasons is fascinating. Of all the opponents to face Dublin regularly, Tyrone are the ones who have taken the firmest grip on the champions’ psyche: three matches have ended in one-point wins – two for Dublin – and the most recent two have been draws.

Championship is different but Gavin’s teams don’t go out with a particularly flabby attitude to league matches and if you beat them, it won’t be with any assistance from them.

Throughout this period it’s fair to say that Dublin have been at their best whereas they are now engaging to at least some extent with the transition process. Conversely Tyrone are stronger than at any previous point since 2013.

Neither team has had to do much since the championship started, although for Tyrone to bulldoze through Derry, Donegal and Down reflects well on them even in the context of a dysfunctional provincial championship.

Dublin’s path hasn’t been much harder and whatever glitches lurk beneath the bonnet will be detected for the first time.

Tyrone’s defensive capabilities are built on additional numbers, protecting the goal and breaking like greyhounds on turnover ball. There is a great deal of focus on them as a counter-attacking unit with Tiernan McCann and Pádraig Hampsey prominent and the tireless patrolling of Colm Cavanagh but as a unit, the defence tackles well and keeps the number of frees down.

This will be important given the place-kicking form of Dean Rock, which gives the most reliable accuracy over a greater distance than any other current free-taker.

Dublin are seldom in a hurry in matches, content to take their time to build scores and continue to do so until that point where the opposition isn’t able to keep up. They will have looked at what Mayo did in last year’s quarter-final – played it safe for the opening quarter of an hour, mirroring Tyrone’s set-up and giving nothing away – and are likely to be happy with an even contest at that stage.

They may even use those freed by the disappearance of the sweepers to supply quicker ball into the forwards, as Mayo did.

Tyrone in this year’s quarter-final were simply too good for Armagh and steadily assembled 1-5 in the opening 15 minutes while conceding nothing. That sort of front running is in the past now and a cagier game awaits.

Dublin are very good at holding possession but they are likely to find this difficult or at least challenging given their opponents’ appetite for dispossessing ball carriers. Faster passing will be required and as it is unlikely that the Ulster champions will be pulled out to the wings that easily, wide angle shots are going to be a temptation even though every failure represents a swing in morale.

That imperative could make Diarmuid Connolly an option at some point but would he be up to the test of mental sharpness after three months off the road.

Defensively Dublin will know that Peter Harte dislikes dedicated tight markers – obviously nobody likes them but he can be distracted, as Donegal showed in better years – but if he gets away he and Matthew Donnelly are quality finishers.

Both teams have effective reinforcements to exploit the inevitable loosening of the game. Dublin’s have greater experience judging by the availability of Michael Macauley and Paul Flynn the last day and maybe even a higher tempo.

This will tell us if Jim Gavin’s rescheduled preparations have worked because Tyrone have pace and movement that can’t be handled unless Dublin are in the upper register.

The champions have to be preferred because they have the physique and pace to compete with Tyrone’s counterattacks. They also have in Philip McMahon and Jack McCaffrey defenders who are as happy to get forward as Tyrone when the opposition drops back.

Centrefield is an advantage because Brian Fenton and James McCarthy have mobility and penetration going forward and finally they have a deeper well of potential scorers in a match like this – as opposed to the fixtures up to now.

Tyrone were unlucky not to win last February but weren’t helped by their inaccuracies. It promises to be suffocating but Dublin can come up for air.