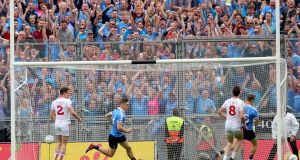 Dublin gave Tyrone nothing. Even a decently struck Peter Harte penalty in injury time was batted away by Stephen Cluxton.

And so, unless Mayo stop them, a three-in-a-row of All-Ireland titles will be claimed on September 17th.

One mistake was all it took. Sloppy distribution by Niall Sludden in the middle third with four minutes played and Tyrone were ruined.

Barely needing the greatest bench ever assembled in Gaelic football, Dublin once again displayed an efficiency unique to this amateur game.

No need for Diarmuid Connolly when a kid called Con O’Callaghan owns these summer months. Connolly warmed up, along with Paul Flynn, Bernard Brogan, Michael Darragh Macauley, Kevin McManamon and Eoghan O’Gara, before taking a seat in the Hogan for throw-in.

Training matters in Jim Gavin’s world. Niall Scully was the latest soldier promoted as Eric Lowndes made way. Scully was strong in the tackle and clever in possession until making way for Flynn.

Mickey Harte’s side pushed up as a 14-man block, retreating in the same manner with Mark Bradley man-marked by Mick Fitzsimons as Johnny Cooper and Cian O’Sullivan patiently filled the vast expanse of green in between.

But when Sludden’s undercooked pass was met by Kilkenny, possession got transferred to O’Callaghan. The Cuala boy danced around the last man and fired a bullet past Niall Morgan.

At this rate the day is coming when GAA folk simply call him Con.

All was not lost but when Paddy Andrews plucked 0-2 from the sky it was clear why Gavin can afford to marginalise so many All Stars.

Heady days for a subdued Hill 16. Five shooters gifted them 1-9 in the opening stanza. Tyrone could only muster 0-5 in response.

Kilkenny enhanced his footballer of the year prospects with a point on the rare occasion he lingered in possession. Dean Rock and Brian Fenton were also motoring and scoring but O’Callaghan’s nimble feet made this packed stadium gasp.

He left for the break untouched with 1-2 banked.

A chink of light for these Ulster champions was the three yellow cards David Coldrick flashed at James McCarthy, Scully and John Small (thumping down on Harte).

But this was bloodless. Dublin even lost their scoring rhythm for 11 minutes until a Rock free, followed by a Harte point from play, brought the curtain down on Act 1.

Nothing changed but the personnel. Another Rock free had Dublin 1-12 to 0-7 clear on 50 minutes. By then Flynn and McManamon were getting a chance to force their way into September football.

Imagine their mindset. These are not just veterans, they are proven champions at the peak of their powers, unable to lay claim to a starting berth.

Before the end came a premature departure for one of Tyrone’s greatest servants. Perhaps for the last time. The captain, five time All Star, three time All-Ireland winner was pulled. The anonymous Seán Cavanagh has destroyed Dublin in his time.

Cavanagh’s younger brother Colm kept plugging away with a long-range score that reduced arrears to seven. Then a Sludden strike made it a six-point game with 12 minutes to play.

Dublin drained all life from the revival as Kilkenny and Fenton calmly pushed the ball between Hogan and Cusack stands, around and back again.

Flynn interrupted such pitter-patter with a fine score. That is Dublin’s greatest strength now – individual champions with a point to prove.

O’Gara was next in and still, as seconds ticked away, no Connolly.

Flynn clicked another quality score as Connolly trotted onto the field. The Hill roared its delight before normal applause saw Mannion away.

And then: Where is he? Lowndes, not Connolly, had number 12 on his back and the St Peregrines man wasted no time getting Tyrone people on their feet, and heading home, when creating the space for O’Gara to punch the second Dublin goal.

Then, finally, Connolly arrived as injury time loomed. The place exploded. He was already down the tunnel, and out of harms way, when Coldrick’s last shrill sounded.