Rising blue tide all but sweeps Tyrone away 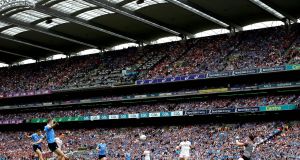 And then there were two. So the only team that can stop this all-conquering Dublin team from winning a third successive All-Ireland title is Mayo, the county whose quest for just one has become the enduring cause of Irish sport.

After Saturday afternoon’s frenzied deconstruction of Kerry, Mayo manager Stephen Rochford took his place in Croke Park to see Jim Gavin’s All-Ireland champions give perhaps their most imperious display of this period of riches.

You have to imagine that the page marked “Weaknesses” was left fairly blank.

There was something of the old military parades in the Red Square about the afternoon as the champions ran their gilded bench without ever finding room for Bernard Brogan and Michael Darragh Macauley, both former footballers of the year. The message was clear. There is no letting up. Nobody is irreplaceable.

Dublin obliterated the Tyrone project with an ease that was frightening and their 2-17 to 0-11 victory marked the last turn for Moy’s Sean Cavanagh, one of the all-time greats. He looks set to leave the game having brushed against a city team that has changed the face of modern football. This was billed as the game the championship was waiting for and needed. Instead, it looked like Dublin cruised to a final in fourth gear at best.

“They are the best Dublin team I have faced in my time,” smiled Mickey Harte. “I wasn’t quite sure that was the case before today but I am quite sure now. Before we played today I didn’t see the gap as that significant. We must believe we are capable of taking that team on. I do not believe we should sort of give up and say this is an impossible task. And I believe we will be capable of coming back and reaching the level that is required today.”

As the teams paraded through the dead heat, Tyrone elected to break away early rather than march down to the Hill 16 end where the blue masses had gathered. The action generated a huge roar of disapproval, a gust of noise which was all but visible as it travelled down to where the Ulster champions stood in a huddle. The effect was deafening: electrifying.

Jim Gavin sat alone through it all, as animated as a man waiting in a deserted Busarus to collect his grand-aunt.

It didn’t take long to see the reason for his composure. It turned out that Gavin and Dublin had broken the Tyrone code in their training nights. They declined to do what every other team has tried all summer: bust and force a way through the collective of white jerseys.

Instead, they tossed the football around on the fringes of the Tyrone defence as casual as a bunch of lads in the park on the summer’s day. They worked the ball through the narrow gaps of space on the flanks and every so often made a burst inside to reel off a succession of incredibly clean, heartbreaking points.

The first turnover – a bad pass to Padraig Hampsey – brought to bear Harte’s worst fears: blue shirts running at an ill-covered Tyrone defence. Con O’Callaghan blew past Ronan McNamee like he wasn’t there and walloped a fifth-minute goal. Ridiculous as it was, there was a feeling of resignation among the Ulster crowd even then. There would be no surprises, no revolution.

“I don’t think any time we play Tyrone is comfortable,” said Jim Gavin afterwards. But it was disconcerting to see so little mischief and anger from the Ulster men. Not only were they not ‘in-your-face’, they weren’t, with the exception of Colm Cavanagh ‘in’ anything. The match-up between Peter Harte and John Small caught the day in microcosm. Dublin clearly identified the Errigal man as Tyrone’s orchestrator. Small was all over him, blocking his runs, pushing and frustrating him until both men were yellow-carded.

It was tough and effective and you searched in vain to see Tyrone men doing anything like the same at the other end of the field. None of the furious tackling they exhibited in Ulster was in evidence here.

They simply shadowed the array of Dublin attackers who circled around, as though terrified by their speed. With no pressure and Philly McMahon and Ciaran Kilkenny pulling strings beyond the 50, Dublin slipped into their highly engineered rhythm of athleticism and finesse. The points were beautiful and clinical and the Hill applauded loyally, but in truth seemed faintly disappointed that there was nothing of the old wars to be found in the day.

“I do believe the critical score was the goal,” said Harte. “If we held out until half-time, it might have been a different game. After that they were playing on their terms, not ours. We had to change things up at half-time and that leaves you open to a wee bit of sufferance at the back. It was going to take a miracle to turn it around.”

Dublin don’t really go in for miracles. The Hill shuffled impatiently waiting for Diarmuid Connolly to come in and erupted when Eric Lowndes appeared wearing Connolly’s number 12. As it was, Paul Flynn had come in to shoot 0-2 and Eoghan O’Gara 1-1 when Connolly was sent on in the 69th minute and he vanished down the tunnel as soon as the whistle went.

“They all want to get game time,” shrugged Gavin. “That is our biggest strength. There were 10 players today who didn’t get game time.”

So a thrillingly tough challenge awaits a Mayo team whose spirit is, it would seem, unbreakable. Beat the best team in modern times and the prize, the glory and the release is yours. A point after two games was how the difference between winning and losing was split last year.

“We played an All-Ireland final last year and didn’t perform,” said Gavin at one stage yesterday evening. “We were lucky to win.”

He seemed distracted, as if memories of last September were troubling him anew. And although he won’t have dwelt on it, maybe he is half-surprised to find that it is Mayo, rather than their high rivals from the Kingdom, that have come through to make a fierce last stand between Dublin’s grasp on sporting immortality – and to make a claim for their own.