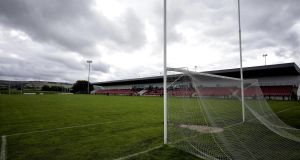 Derry defeated Longford by eight points at Celtic Park on Saturday. Goals from Patrick Kearney and Paul Cassidy proved the key scores for the Oakleaf men.

The home side impressed from the start, mixing their attacks between early direct balls into the square and the more patient and ponderous fist-passing approach. Ciaran McFaul, young Ethan Doherty and the returning Enda Lynn were Derry’s conductors in chief, finding Niall Loughlin and the always impressive Shane McGuigan with regular consistency. Indeed, Rory Gallagher’s side led 0-5 to 0-1 by the first water break with McGuigan’s brace and a clinker point from Lynn the highlight of the early scoring.

Reluctant travellers Longford, like their opponents Derry still with an outside chance of promotion before throw-in, finally arrived in the 17th minute when Darren Gallagher curled over a fine free to open their account. Points from Rían Brady and Dessie Reynolds reduced Longford’s gap to two before the Oakleafers finished the half with a bang. Patrick Kearney’s goal in the 33rd minute nearly bust open the net to leave Derry 1-7 to 0-4 up at half-time.

The visitors enjoyed the better restart with Colm P Smyth their best performer. They trailed 1-9 to 0-9 before impact sub Paul Cassidy fired home Derry’s second goal in the 56th minute.

Longford notched then three-in-a-row but failed to work the scoreboard after that. Derry, as they began the contest, finished the stronger. Oisin McWilliams, Brendan Rogers and the exciting young Paul Cassidy finished off the evening’s scoring with Derry taking home the points.