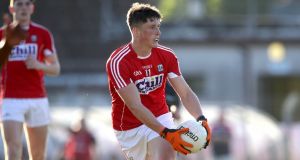 Cork duly clinched the Division 3 title and condemned Louth, who finished with 12 players, to the drop after a comprehensive win at Páirc Uí Chaoimh on Saturday.

It was Cork’s sixth win from as many outings and they make an immediate return to the second tier next season.

They led by 3-9 to 0-8 at half-time after playing with the wind in the first half.

Colm O’Callaghan claimed the first goal in the eighth minute following a Paul Kerrigan pass, the second score in a run of nine without reply.

Kerrigan supplied the telling pass again for captain Ian Maguire to palm the ball over the head of stranded keeper Craig Lynch for a 2-4 to 0-2 lead by the 20th minute.

Louth found themselves 3-7 to 0-3 adrift, but Tommy Durnin and Sam Mulroy helped them kick five of the next seven points.

Any slim prospect of a Louth revival in the second-half died within four minutes as Ruairi Deane placed Kerrigan for his second and Cork’s fourth goal for a 4-11 to 0-8 lead after 39 minutes.

Power back to bid for Grade One honours with Chris’s Dream 16:00
Conlon’s hopes of title eliminator against Dogboe dashed due to injury 15:39
Simon Easterby: Ireland must focus on winning the match first 15:15
Mick McCarthy in line to take charge of Apoel in Cyprus 13:24
Solskjær praises Man United’s response to ‘brutal’ Spurs defeat 11:54
Crossword Get access to over 6,000 interactive crosswords