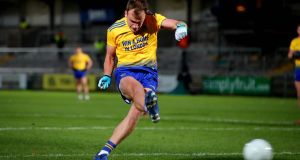 Roscommon’s Enda Smoth scores a penalty and their second goal of the game during the Allianz League win over Armagh. Photo: Ryan Byrne/Inpho

Roscommon delivered a major shock in Division Two of the Allianz Football League when they brought Armagh to their knees in a tingling contest at the Athletic Grounds.

The visitors shrugged off a sluggish start before slipping into their rhythm and leaving their hosts trailing in their slipstream, their herculean second-half work-rate carrying them to a thoroughly deserved victory.

But it was the home side who drew first blood when the industrious Rían O’Neill potted a sixth minute free before Calum Cumiskey repeated the dose five minutes later.

With Oisín O’Neill and Niall Grimley beginning to carry a greater threat at midfield, the Armagh attack began to function more smoothly and a five-minute scoring blast saw O’Neill (2) and Conor Turbitt hit the target.

At 0-5 to 0-1 Armagh were beginning to look more comfortable but they were rocked back on their heels when Roscommon shook off their profligacy in front of goal to plunder a goal and three points between the 29th and 33rd minutes.

It was Enda Smith who thundered a penalty to the net after he himself had been upended with McKeon and Conor Cox also hitting points.

But Armagh summoned their considerable experience and fire-power to finish the first-half on a high. Rory Grugan fired over a spectacular point from play, Oisín O’Neill did likewise and Grugan added another to give his side a 0-8 to 1-3 interval cushion.

However, Armagh were unable to maintain their momentum after the break as they conceded ground to their reinvigorated opponents.

The turning point came in the 42nd minute when Smith converted his second penalty and it was Conor Daly who buoyed Roscommon even further when he thundered home their third goal three minutes later.

And it was perhaps appropriate that the lion-hearted Cox should have sealed the deal for the visitors by landing their last point from a free.