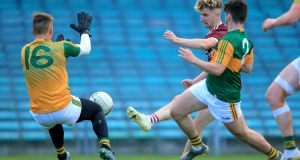 Galway produced a strong finish to book a place in the EirGrid All-Ireland U-20 final next weekend against Dublin after a deserved win over Kerry at LIT Gaelic Grounds in Limerick.

Both sides were heavily impacted by Covid-19 issues and had to line out without several players.

They still produced an excellent contest in which the sides were level half a dozen times before the Tribesmen pulled away in the final quarter.

Senior player Matthew Tierney led the way with flawless kicking from placed balls while Cian Hernon, one of the players drafted in, produced a superb display in the middle of the field.

Kerry, having made four changes to their selected side, led by 1-7 to 1-5 at the end of an entertaining opening half.

One of Kerry’s late additions, Eddie Horan, kicked two early points with the wind behind them but then wing-back Cian Monahan scored a Galway goal after seven minutes after a delivery from his twin brother Ryan broke for Tierney to set up his Oughterard clubmate.

Kerry’s Lithuanian-born goalkeeper Deividas Uosis, another late call-up, produced a point blank save to deny Matthew Cooley at the end of the opening quarter.

Then Uosis, who is due to join Brisbane Lions in Australia, then went up field to slot over a 45 just before the break for the first of his three points.

Horan added a third point and full-forward Paul Walsh kicked two good scores from the right before he had to go off at the interval with a hamstring injury.

Kerry got a big break after 27 minutes when a delivery from Sean Keane was knocked down by Horan and Ruaidhri O Beaglaoich blasted into the left corner to lead by two at the interval.

Galway, with Hernon on top in midfield with Conor Raftery, delivered some quality ball into attack after the restart and with Kerry forced to foul, slotted four placed balls in the third quarter to edge in front.

Goalkeeper Uosis levelled for the sixth time 13 minutes from the end with a free for his third point but Galway outscored them by 0-6 to 0-1 after that in a strong finish.

Wing-back Monahan edged them back in front after 50 minutes and they never looked back after that.

Kerry, who had lost Sean Keane to a black card before the break, finished with 14 men when wing-back Luka Brosnan picked up a black card after 54 minutes.

Galway dominated the closing stages and two points from Cooley and one from man of the match Hernon set them on their way.

And they sealed the win and set up a final date with Dublin next weekend with Nathan Grainger and Patrick Kelly landing late points.

1 Seán O’Brien: Anger over my parents’ break-up never left me
2 Hugo Keenan and Will Connors: The best of friends, the best of debuts
3 Ireland get the job done against Italy to keep alive Six Nations hopes
4 France warm up for Ireland with impressive win over Wales
5 Ireland 50 Italy 17: Ireland player ratings
Real news has value SUBSCRIBE