Corbet on top form as Laois battle past Longford 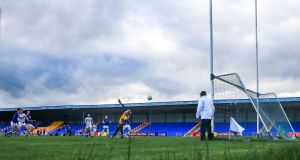 A fantastic second half of football saw Laois overcome a battling Longford side to set-up a Leinster semi-final clash with Dublin next Sunday afternoon.

Laois can thank their keeper Niall Corbet for two stunning saves at the start of the second half that denied Longford two goals.

Longford were five points up in the second half but went 20 minutes without scoring as the O’Moore County came storming back into the game and kicked seven unanswered points which proved to be the difference.

Longford played some very good football in the opening quarter and opened up a six-point lead in the 13th minute when a mark won by Darren Gallagher led to Longford’s goal in the sixth minute with Des Reynolds firing a powerful shot to the net. A pointed free from Rían Brady extended Longford’s lead to six on 13 minutes.

Laois were back in the game two minutes later when Paul Kingston scored a goal. Two frees from Gary Walsh and a superb long range point from Kingston cut Longford’s lead to one in the 26th minute.

Longford replied with points from Gallagher (free), two from Brady (one free) and a neat Donie McElligott point to go in front by five points in the 33rd minute. Laois got two late points to leave three between the sides at the break.

In the opening four minutes of the second half Laois netminder Corbet pulled off two excellent saves to deny Longford further goals. First he denied Donie McElligott inside the opening minute while he also denied Des Reynolds a second goal in the 40th minute. Daniel Mimnagh pounced on the loose ball and fired the ball over the bar.

Reynolds stretched Longford’s lead again to five in the 44th minute but that was to be their last score for 20 minutes as Laois upped their game and turned a five-point deficit into a two-point lead.

A terrible kick-out saw Gary Walsh level matters in the 54th minute. A good point from corner-back Trevor Collins edged Laois ahead for the first time in the game in the 56th minute and a Walsh free put two between the sides.

Longford lost corner-back Paddy Fox in the 60th minute with a black card but they drew level in the 67th minute with a fine point from Joseph Hagan but Laois came back at them with points from Walsh (free) and substitute Sean O’Flynn. Ross Munnelly received a black card near the end but it mattered little.